Women's movement protests? No, we just imagined it 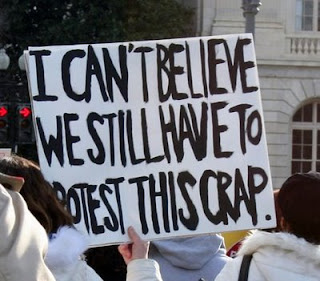 Unlike TVNZ, Prime is doing its best to give us something approaching a watchable, meaningful history of the first 50 years of TV in NZ. Last night it “did” protest, from the first tiny anti-nuclear movement events to the religious right’s objection to legislation on civil unions.


All the great waves of protest were there, from Vietnam to homosexual rights. Except one. You wouldn’t know that there had ever been a single women’s liberation protest event in this country, let alone a major movement creating headlines for a couple of decades.

No mass pro-choice or anti-choice protests. No beauty contest protests or Reclaim the Night marches. No street theatre. The very first public women’s movement event here to appear on TV was the Anzac Day protest in Albert Park, Auckland, to highlight women as victims of war. But no – none of it happened, apparently. Nor was a single women’s liberation veteran interviewed – though there are cerainly plenty of them around.

Of course, that movement wasn’t about really significant things, like shooting wars, or bombs, or rugby, or race. Or even male sexuality. It was simply about the profoundly unequal conditions in which half the population lived, and the women who wanted to change that. The protesters included girlfriends, wives, daughters, sisters, even mothers, of the men (save for a few independent pioneers like Merata Mita) who made the news and the TV programmes.

The protesting women may have made headlines at the time, but even if all those protests did happen, they just didn’t count, eh. Didn’t matter. There was no need to take any notice of them or the movement they sprang from for something major like a survey of TV coverage of protest over the last 50 years. Not when there were all those other really important protest movements to deal with.
Posted by AnneE at 10:50 PM 6 comments:

World Cup - It's not just a ball that gets kicked

When the telly is showing All White Winston Reid's last-minute goal against Slovakia for the 326th time, even though it didn't even win the match for NZ, it would be a good idea to have a look at this post about the marked increase in domestic violence during the World Cup. Here's part of it:

"England's Home Office has warned that during the 2006 World Cup, domestic violence increased by 25% on game days and 30% when England was eliminated from the competition. The problem is troubling enough that the Association of Chief Police Officers, with the hopes of discouraging incidents, has created a video showing a drunk man hitting his wife after England has presumably lost a game. The ACPO has also been using a blood-stained soccer jersey labeled "Strikeher" to encourage women to report attacks.


Meanwhile, a professor at the University of Royal Holloway London is urging women to have a plan in place in case their partner becomes violent during the World Cup. She tells women to let their children sleep somewhere else, to know where their car keys are, to have the cell phone ready to call police."

This is probably not a news item coming soon to a screen near you. But the organisers of the Rugby World Cup should take note and work out how they plan to "discourage incidents" here too. I suppose it would be seen as outrageous to urge that a portion of all ticket sales be given to Women's Refuge.
Posted by AnneE at 11:18 PM 1 comment:

I'm watching the current "welfare" talkfests with little hope that they will point to any genuinely sensible, realistic, effective changes which will actually help people. Today the Dom-Post reported a fascinating Dutch innovation that I'm quite sure won't be followed here - though maybe it should be.

Three Dutch councils are offering single unemployed Dutch women (it doesn't say whether they have children) a fashion and beauty grant and free membership of a dating agency, "to get them off the dole by finding a solvent husband" - or a job.   The councils think that "finding love" will help to get people - men are eligible too, though obviously they think it will apply mainly to women - off benefits by "improving confidence, ambition and motivation". But after adverse publicity, the scheme's been put on hold.

In fact these councils are onto something. Every in-depth piece of research into DPB recipients shows that the main way to get off it is through repartnering. In other words, for women trying to raise kids on their own, the vast majority of them after a "separation" (as it's so neutrally called), it's much harder to find a sustainable job than it is to find a new man with a man's wage. Of course that "new man" often used to be attached to another woman with kids, who may well now be on the DPB herself, but that's life.

So now that sole mothers are being classed as virtually no different from any other unemployed person, the idea of helping them find a new male partner who will be able to support them is just plain common sense. It's a lot more realistic than expecting the right number of manageable, well-enough-paid jobs to appear out of nowhere in response to the kinds of blunt-instrument changes being talked about now, like cutting the DPB when the youngest child turns five.

And of course, if the new relationship breaks down, I guess the state would be perfectly within its rights to bill its "client" for the cost of her makeover. It can deduct this weekly from her new DPB.
Posted by AnneE at 11:18 AM 6 comments: