It's exactly six months today since Harvey died on Christmas Day, and once again it's a Saturday. I knew I'd need to be occupied, so it was good when a couple who'd known Harvey for a very long time, and visited faithfully when he was ill, invited me for lunch. Geoff was at Canterbury University with him, and they'd often been taken for brothers.
The sun helped too. I took Geoff and Pam a pot of hyacinths, and on the way home I bought one for myself. Harvey loved them and always used to plant a bowl of them for me, then for a couple of years I did it, but last year I bought them instead. Only three, instead of the six or eight we used to grow, but they'll be beautiful.

Last Sunday I got through another of the things that had to be done - handing most of Harvey's superb library of New Zealand poetry over to Mark Pirie, who published Harvey's poetry from 1999. Harvey wanted him to have the books, knowing he would fully appreciate them and make very good use of them.


But the empty bookshelves look bereft - "Bare ruined choirs where late the sweet birds sang". Looking back to last year, the sadness of Shakespeare's Sonnet 73 seems to fit perfectly.

That time of year thou mayst in me behold
When yellow leaves, or none, or few, do hang
Upon those boughs which shake against the cold,
Bare ruined choirs, where late the sweet birds sang
In me thou see'st the twilight of such day
As after sunset fadeth in the west;
Which by and by black night doth take away,
Death's second self, that seals up all in rest.
In me thou see'st the glowing of such fire,
That on the ashes of his youth doth lie,
As the death-bed, whereon it must expire,
Consumed with that which it was nourish'd by.

This thou perceiv'st, which makes thy love more strong,
To love that well, which thou must leave ere long.

Yes. Except that he did manage to sing a little almost to the end, and I need to show the same spirit and courage. Here he is at about 50, looking wonderfully Shakespearian.

Only a short post, as it's 11.21 pm. But I wanted to write briefly about what happens when I get completely absorbed in a longish and demanding piece of writing, as I did tonight. I know all the experts tell you to start writing first thing in the morning, but I've rarely done that; mostly I start in the evening, often after 8, and carry on till rather too late. I couldn't follow this pattern while Harvey was ill, as I had to be on deck for him in the morning, but it's how I naturally work. The danger is that I'll get distracted or tired or find some other excuse not to start at all, but providing I can overcome the resistance to sistting down and getting on with it, I'm away for the next few hours. And for that time, I forget everything else.

I remember reading that happiness is a by-product of absorption. (Thanks to Google and Clive James, I can tell you that it was T.E. Lawrence - Lawrence of Arabia - who wrote this.) Writing is the most absorbing thing I do. I'm not sure that it makes me happy, exactly, but it occupies my attention so completely that I become unaware of anything else. We set up a bell for Harvey to ring when I was upstairs and he needed me, but every so often when I was writing, I would not hear even that. (I sometimes used to wake suddenly from a deep sleep because I seemed to hear it ringing; even now, this still happens at times.)

This deep absorption in writing is somehow necessary to me; if I haven't experienced it for a while because I've been evading writing (and it is evasion, rather than simply avoidance, especially now, when I have no valid excuse for not doing it), I start to feel the way I imagine runners feel when they haven't been running. It's what Tillie Olsen meant when she wrote about the importance of a woman writer working "to the fullest extent of her powers". I don't think I'm doing that yet, but every time I write in a way that takes me "out of it" - completely away from my everyday life - I feel I'm getting there.
Posted by AnneE at 12:02 AM 1 comment:

I'm quite pleased with myself. Thanks to the company of friends, I've had one long (for me - maybe an hour?) walk through a bush reserve on Sunday; all the way from Courtenay Place back through town on Wednesday (don't laugh); and along the waterfront today. The weather has had a lot to do with it - still remarkably good for June.
One of the many advantages of living where I do is that the wonderful Marsden Books is so close. On Tuesday evening I went there to hear sisters Atka Reid and Hana Schofield talk about their book on the war in Bosnia, Goodbye Sarajevo. (New Zealand is such a small place - turns out that Atka is married to a good friend's husband's cousin... )
Something Atka said struck me as applying very well to my own situation, even though what she and her family went through is of course incomparably more harrowing. She said that during the siege of Sarajevo, "we just had to get on and work out some structure for our life, based on the things we could control".
I thought, yes, that's exactly what I have to do too. I couldn't control Harvey's becoming ill and then dying and not being here, and I can't entirely control the sadness that wells up in me because of that. I just have to accept those things as a given. But I can control pretty much everything else in my daily life, and that does give me plenty of scope for working out how to live. 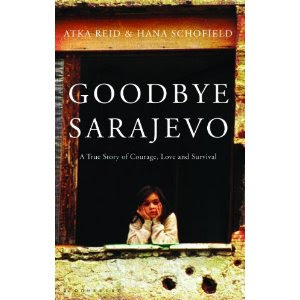 Have advice, will try

Thank you very much to all the helpful people who sent me ideas for exercise - though some had more potential than others (I haven't been able to wear even very low heels for years and I don't think they make orthotic-friendly tango shoes). Visitors are about to appear, so apologies for this short post, but I will ponder the exercise question further - and at least I'll have someone to go for walks with this weekend. I like the idea of the rebounder, and they're easy to buy on Trade Me - except that they all have ads that go like this: "My partner used it a few (maybe half a dozen?) times and it's been stored away carefully so it's in perfect condition. I'm only selling it because she doesn't use it anymore." Which is a bit of a worry.... Anyway, just writing about it is a spur to getting on with it, as it would be great to be able to report how well I'm doing!

PS: Today's post over on Something Else to Eat is about another aspect of living alone - the difficulty of deciding what I want to eat now that there's only me to consider.
Posted by AnneE at 9:48 PM 1 comment: