It seems impossible that our stay in the Loire Valley is nearly over. I'm sitting in the lovely enclosed garden of our gite ( the wifi can't make it through the thick walls, so I need to use it outside), beforewe set   off on our last little local expedition to the baker, the butcher and he cafe. We can walk there along the Loire, and we have, but it takes 45 minutes each way so today we're driving. Here's the river at the end of our lane. Cour sur Loire is, according to the Unesco sign on the riverbank, the exact centre of the Loire Valley world heritage site - a nice thing to know. 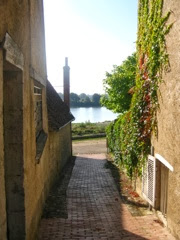 We've been to five chateaux, including the one in Blois, and one tiny one, Troussay, the smallest of them all. In Blois (heavily bombed in 1940) we saw a striking war memorial - it included not only soldiers (militants)' but also civilians, resistants, and deportees, and noted that the government of the day had been complicit in what took place. Chenonceau, the graceful "Ladies' Chateau", sat on the Cher river on the border of occupied France, and the owners smuggled people out through its passageways. 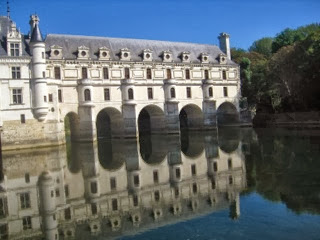 There are sometimes odd lacunae in the official leaflets. Our last and most distant chateau, Villandry, was said to have been completely restored - including the fabulous gardens - by a Spanish scientist. But not until we got inside did we discover that all the money and half the enthusiasm came from his American wife, Ann Coleman, also a scientist and the heir to an industrial fortune, who defiantly married him when the US was at war with Spain. Here's part of heir legacy, I'm so pleased to have seen it. These are the gardens of love - romantic, affectionate, flirtatious and tragic ( the dagger shapes). They were restored according to ancient accounts of hem and the archaeological traces they had left in the earth. And of course Harvey would have been fascinated by them. 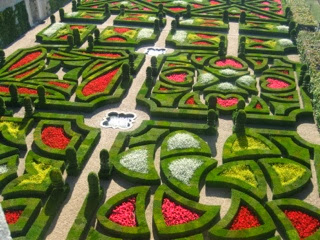 So, off soon to new adventures ( this time by myself) in Tours and Lyon. Mostly when I speak French, people respond with perfect equanimity, so I expect I will manage without too many dramas.
Posted by AnneE at 8:37 PM 2 comments:

In October 2002 we made our way through a completely unseasonal snowstorm to the Hackescher Hofe, a whole complex of shops and restaurants in a splendid Art Deco building in Rosenthaler Strasse.  We took refuge in Oxymoron. When we finished our morning coffee and cake it was still snowing. We looked at each other and decided to stay on for lunch. Later we brought Ulrike and Lisa back for breakfast. I was determined to go back this time, and today I managed it. It's exactly the same, with its odd-one-out lamps in the chandeliers and the big red sofa. I sat at the same table by the window and had a glass of Gruner Veltliner (they've started growing it in Nelson now) in Harvey's honour, and a slice of Florentiner Kirschtorte - cherry cake. And I had a discreet little cry.

I'm trying to work out how to add iPad photos to a post and I think I've just solved it. Here's what I wanted to put in the previous post - Ulrike at Charlottenburg. The boat let us off for a walk in the lovely formal gardens. 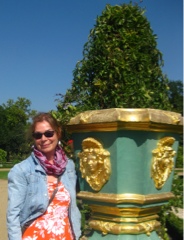 Harvey and I first came to Berlin in 2002, after he retired for the third and final time. We stayed with Ulrike. She had come to Wellington in 1996, with her husband and daughter, as the German language schools advisor; at that time the teachers' college council oversaw the advisors, so Harvey was her boss (she said he was the best she ever had). The family spent five years in New Zealand and we became close friends.
Being a historian, Harvey was totally gripped by this city. Our  first visit to Europe together had been in 1989, and we were in London when the wall came down. On a train two months later, we met a Berlin businessman who was keen to talk to us. He had grown up with the wall, and after it fell he started working in East Germany to help them overcome the immense gap with the West in computerisation. For two hours we listened as this sensitive, intelligent man spoke frankly of what this profound change meant for him and his country.
So now here we were, and we could go everywhere: to the synagogue, the Kathe Kollwitz house, the new Reichstag and the Brandenburg Gate. We saw the last remaining scrap of the medieval city wall, and the long piece of the 20th century one by Checkpoint Charlie. If you go to Harvey's blog at http://stoatspring.blogspot.com and search for Berlin Diary, you can read his account of two days in our time there.
I came again on my own in 2006, straight after I got my PhD. I saw the museums that had reopened since 2002, and recovered from them at our favourite cafes, the Einstein and the Oxymoron.   I went to the market with Ulrike and carried home fat buds of pfingstrosen, "Pentecost roses", as the Germans call peonies, to decorate the house for the public holiday. And I emailed Harvey to tell him my adventures.
As his illness worsened,  I told Ulrike I would come to her after he died. I waited till she retired and their new house was ready, and now I'm here. Yesterday we cruised the river, past so many of the landmarks I'd seen with Harvey - it was such a calm, easy way to pay my respects to our shared past. For the hundredth time this trip, I told Ulrike how much he would have loved being with us. What I meant, of course, was how much I would have loved him to be there.