I'll have people with me this week, so the next post will be the week after. By then I'll be making the Christmas pudding (see Something Else to Eat), as well as learning (at last) how to deal properly with the full range of social media and chat about my food memoir when it comes out next March - it's already featured in a Listener article.
Last Monday, Labour Day, was the 25th anniversary of my younger son Patrick's death - he would have been 43 now. As you can imagine, I knew it was bound to be a difficult day. So I took the precaution of asking a very good friend to come and spend it with me.
First we went to Patrick's tree in the Botanic Gardens, then to Harvey's plaque down the road in the Karori Cemetery rose garden. We took the two lovely little bunches of flowers that my neighbour had brought over specially for me that morning.
Patrick's tree is so tall now (like him) that we can only just reach high enough to lodge the flowers in its lower branches. As for Harvey, I'd seen earlier that the little in-ground flower holder I'd put there for him before (and will replace) had vanished when they redid that rose bed - you may recall it was ailing earlier, now it's been beautifully replanted. So I rose to the occasion, took down his favourite whisky glass, and set it in the soil to hold his flowers. When I told a friend that night, she said, "He'll be saying, Well, here's the water, but where's the whisky?"

The ghost in the machine 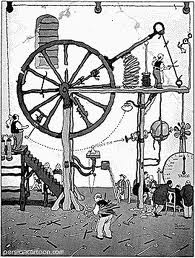 Harvey's computer has been sitting in my spare room for about 18 months now. I moved it upstairs soon after he died. I knew that in a sense it was his afterlife. I also knew I'd have to deal with it at some stage -  go through everything on it, decide what should be kept, save it in some form, remove everything else and dispose of the computer itself.

He'd been so well organised that he'd published his last book of his own poetry in his last year. I knew there wouldn't be a lot there that he hadn't already used. But the one thing I knew I had to keep was the entries for his diary, some of which I hadn't yet read, because he had never printed them out. He'd stopped keeping it after he started his blog (and of course, after he was no longer able to go out or do anything much except write, read, think and talk).
It took me quite a long time, but I finally realised I was never going to sort all this out sitting at his computer. It has a curved screen I don't like, and his keyboard doesn't suit me. It's in a room that's too light, so to use it you have to keep the blinds pulled. And soon after he died I did something wrong and the whole contents had to be rescued and the software reinstalled. I was immensely grateful to the friends who helped with all this, but since then it doesn't seem to run very smoothly. So I just ignored the problem.
A while ago I met a student who was carrying round a box about the same size and shape as an old video recording. She said it was an external hard drive, it cost about $150, and she could keep a whole computerful of work on it.
This week I bought one of these boxes and got my lovely computer man to transfer all Harvey's documents, pictures and emails into it from his computer. It worked very well, and it took up only a tiny fraction of the two terabytes of storage available. (Lovely word, terabyte, it sounds like a large friendly animal of some kind, maybe a sort of combination of a dog and a small dinosaur...)
In theory, we should then have been able to delete everything from Harvey's computer and erase his user name. The final curtain. But at the last minute I got cold feet. I was very grateful when my computer man suggested I could just leave it for a while, until I'd made sure (by looking on my own computer) that everything I wanted was safely stored away. Strange, isn't it, how dealing with machines can be so emotional. But for writers, especially, their machines now feel like a part of their soul.
I can now deal with everything that was on his computer much more easily, and I certainly will...soon. The other thing I have to do soon is decant everything out of my computer into the box, where my words can sit companionably alongside Harvey's. I need to do this because I'll soon have to get a new computer for myself, partly so I can learn to do all the flash social media stuff to promote my ebook. It will be out in March, and I'm told that the next Listener will have an article on ebooks in which it figures - I was interviewed this week.. My first food memoir media appearance!
Posted by AnneE at 9:42 PM 2 comments:

As in everything I've done to feel better (I even went for some walks! Yes!) and everything my on and offline friends have done to help me feel better, is working very well indeed. The further down you go, provided you don't get stuck there, the more you seem to rise up when you recover.  Of course next week I may well feel completely differently, but so far - so good.
And also as in actually working - I've had a raft of paid and unpaid writing to get through these last two weeks, all of it with deadlines and relatively difficult to do, and nothing is more absorbing or makes time disappear more effectively. I was so immersed last night that (admittedly after a very late lunch) I didn't have dinner till 10 pm. It was one of the times (few, but probably increasing) when I did for a moment think that there are advantages to living alone.
It was so late that I thought I might as well take my dinner to bed and go straight from eating it to bedtime reading. I'm temporarily between review books (see my What I'm Reading sidebar), so I resorted to an ebook instead - I've got a couple that I downloaded but didn't read straight away because other things took precedence. It's very good to have them handy when I need them.
Here's the Warrior Woman print Harvey brought back from Kyoto for me, with an apricot iris that opened from a sheaf of buds I was given. It's shrivelled away to nothing now, but others have taken its place. 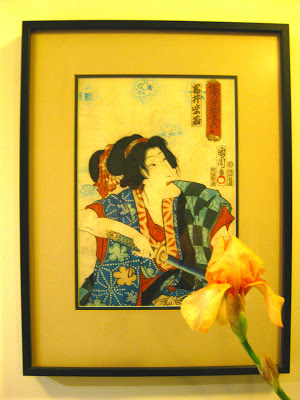