Today I saw Made in Dagenham, a film about the 1968 strike by 187 car-seat women machinists at the Ford plant outside London, which led ultimately to the British government passing the equal pay law. I've just been trawling through the British reviews. All of them by men, they range from condescending to sneering, with lots of nudge-nudge references to that hoary British sit-com, The Rag Trade, as well as to director Nigel Cole's previous hit, Calendar Girls.

I think you should see Made in Dagenham, and take your daughters and grand-daughters. First, it captures brilliantly the pervasive, blatant, smug, completely taken-for-granted sexism underpinning those far from distant days. The two things the men who ran the unions and the companies could agree on was the male right to be paid more than women, and be fully serviced by women at home.

The women working at Ford were probably better paid than most women factory hands, but they still earned less than the men and worked in a leaky, run-down, hot building (so hot, according to the film, they commonly took their tops off and worked in their bras). The strike began when Ford reclassified their work as unskilled, meaning, of course, less pay (though the actual details of their hours, rates, etc are far too tedious to be covered on film).

Despite union leaders' attempts to get them to back off and behave, they instead upped the ante, demanding equal pay with men. The women won the support of the union members, the Labour Government's Barbara Castle met the strike leaders, and after a partial victory for these women, two years later Britain passed a law bringing in equal pay - though still, of course, only for "equal work".

All this has been turned into a great story which will have huge popular appeal. The script, by Billy Ivory, never once made me cringe - except maybe when Barbara and Rita swap clothes chat just before their big moment with the press. It shows what the women are up against, at home as well as at work. Their uncomprehending menfolk are staunch unionists until it comes to being laid off when the lack of car-seats brings the plant to a standstill  - and then having to get their own dinners and mind their own kids, because their wives are off demonstrating and negotiating.

The film has understandably collapsed the group of women who led the strike into one, the young, attractive Rita O'Grady, played by Sally Hawkins (who starred in Ken Loach's Happy-Go-Lucky). There has to be, I suppose, one heroine, even though that wasn't how it happened.

One other thing brought home to me how much liberty most historical films take. At the end, as the credits roll, there are side-clips of the actual women involved talking about the strike - they must have been interviewed by the makers, I wish we could have a documentary as well. There's also archival news footage of them in 1968, with Barbara Castle.

The factory women look absolutely nothing like the mini-skirted, mostly young, often busty and peroxided, swinging sixties women in the film. They're a bunch of extremely respectable-looking, often middle-aged women with perms and neat cardies. They reminded me more of the women in Mike Leigh's Vera Drake. Now there was one film that really did manage to look like the times it was recreating on screen, and very grim it was too.

Still, it's much better to have this film than none, and I'm sure it will draw far bigger audiences than Vera Drake, precisely because it's a lot more entertaining to watch. Unlike most of the overseas reviewers, Charlie Gates of The Press, Christchurch, understands what it's doing:

"When was the last time you saw a film with a strong female protagonist? A proper film that wasn’t about shopping, getting a man, climbing the corporate ladder or all three. Made in Dagenham is one of these rarities and it is a pleasure to watch...Made in Dagenham is full of warmth, humanity, humour and genuine drama...It keeps a perfect balance between the intimate and the turbulent sweep of history."

Even more unusual, Gates actually checked out how true-to-life the film was.  "My partner's Nan, Flo Patston, lived near the Dagenham plant during the strike and her husband, Johnny, worked at the plant in the 1960s. I knew Flo had already seen the film, so I called her in England to see what she thought. She said it was a 'brilliant film' and gave it 'four stars and more'."

And Flo also said all the strong language the women go in for was perfectly genuine: "That’s what you heard on the factory floor. That’s how working class people spoke."

Four stars to you, too, Charlie, for your fine review. Go and see this film for yourself.
Posted by AnneE at 11:44 PM No comments:

It was heartwarming to read the comments on my last post about Patrick, and also to hear from other friends who've contacted me about it. Homepaddock, I'm so sorry you too belong to this "club no one wants to join" - exactly.

Tonight the news featured the father of the young child killed by a young man's poor driving. I'm putting it that way because of course he never meant to swerve onto the pavement, he wasn't going particularly fast, and he immediately did everything he could to help. He was so devastated that he had tried to commit suicide.

The father didn't want him to go to prison, and said everything he could to support him. Such a change from the "lock 'em up and throw away the key" stance, which would have been perfectly understandable in the circumstances.

I read recently (sorry, I can't recall where) that two-thirds of those in prison are in for less than a year. This means they have no access to most of the programmes on offer. What on earth is the point, then? Especially as those we (the respectable ones, that is) lock up are highly likely to be illiterate and/or deaf and/or abused and/or mentally ill and/or addicted. Whereas the smooth white collar ones rarely go to prison, even though it can reasonably be argued that they have had infinitely more chances in life and have still chosen to rip people off, so they actually deserve more severe punishment.

So I'd like to say thank you to that bereaved father, too, for showing such courage, generosity and kindness, and wanting the young man to be all he could be, since the little boy couldn't.
Posted by AnneE at 9:25 PM 1 comment:

Today it's 23 years since my younger son, Patrick, died in an accident in Sydney. He was eighteen and a half. I'm writing this post today for every parent who has lost a child, and particularly for those whose child was, like Patrick, just on the verge of adulthood. How would his life have turned out? Would he have been happy? Would he have had children? I think he would have been a good father - he could see and understand how people were feeling. But all that is lost now, to him and also to us. Haere atu, e tama, haere ki te huinga o te kahurangi, haere, haere, haere.
Posted by AnneE at 4:16 PM 5 comments:

I've finally managed to start reading Wolf Hall, by Hilary Mantel (winner of the Man Booker prize in 2009). I am overcome by admiration of her power as a writer. Historical novels are very difficult to do successfully. Usually they fall into the trap of letting the research show; just a little too much detail, on pretty much anything - furniture, clothing, food - is enough to give the game away. But not here. Her style seems astonishingly plain and direct, yet is full of complexity - very like her central figure (as she imagines him), Thomas Cromwell, as he skilfully negotiates the shifting, deadly tides of Henry  VIII's court while the king tries to rid himself of Katharine and marry Anne. None of the film or TV sagas based on that perennially fascinating era can hold a candle to this brilliant book. But it does, of course, demand commitment and concentration of a kind that may be threatened by the very different reading environment of the internet. I don't want to live in a world where books like this are no longer written, or scarcely read. Still, right now they continue to be acclaimed.

Bill Clinton and I

Bill Clinton and I are alike in one curious respect. We both have an annoying condition called rosacea. The name gives an idea of what it is - reddening of the skin on your face. It's also known by the appallingly inelegant, insensitive name of "muzzle rash". I bet the medical man who thought that one up didn't have it himself, and I doubt that his wife had it either.
There's no cure, but you can treat it very effectively with a gel called Rosex. I'm mentioning this because it's quite a common condition in middle age, and I've had friends with it whose doctors hadn't told them about Rosex, so they were really pleased to find out about it. I think you need a prescription, but I'm not sure. In any case it's one of the things that isn't subsidised, unfortunately, so you have to pay for it yourself. But it does make a big difference. 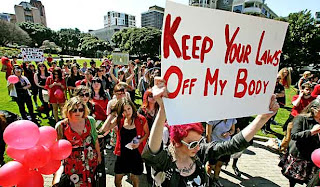 The good news is that so many young women (well, younger than me) are standing up for a woman's right to choose. This photo of the pro-choice demo outside Parliament on Tuesday appeared in the Dominion Post on Wednesday with good pro-choice quotes.

The bad news is that these women are still having to protest a 30-year-old law which does not give women the right to choose, was ludicrous when it first appeared and is even more ludicrous now.

For an excellent round-up of recent reports and comment on the current court hearings, including the Dom-Post, go here. And Boganette has a brilliant post replying to a friend who asked her how she could be "pro-abortion".
Posted by AnneE at 10:10 PM No comments:

Hand Mirror Post - should this woman have gone to prison?

Over on The Hand Mirror I've posted about the case of the mother who let her child drown in the bath, and was this week sentenced to prison. It's been troubling me all week. Have a look and let me know what you think.
Posted by AnneE at 11:00 PM No comments: