One of the changes in my life is that I watch - or rather, often want to watch - rather more television than I used to. As I wrote over on Something Else to Eat recently, I need to have the TV on while I'm eating dinner on my own, otherwise it feels too lonely. Radio or reading doesn't work, it has to be TV. But that means finding something that I can watch relatively calmly. And as I don't have Sky, I'm restricted to the "free-to-air" channels. (Odd, isn't it, how that's become such a disdainful term.)
The first half of the news is okay, but as I usually eat round 7 pm, that means waiting till then and watching TV3 news on the channel where it runs an hour later. Alternatively, I can watch Campbell Live, provided it isn't too appallingly banal (Mark Sainsbury isn't even in contention), or - probably the pick of the bunch - the Simpsons. And that's pretty much it. If I run any later than 7, there's sometimes a cooking programme, but I've discovered that cooking programmes and dinner just don't mix. All they do is make you dissatisfied with either what you're eating or what they're making or both.
Later on it gets worse. Biggest losers, swapped wives, bratty children, serial killers, cold cases - I think I hit rock bottom the night the two main-channel mid-evening offerings were The Worst Teeth in Britain and The [British] Neighbours from Hell.
On Anzac Day, TVOne did have what looked like an interesting, relevant documentary (an extremely rare beast these days) about the RSA. Only one problem - it was screening at 6.25 am, just when those who would most want to watch it would be at the dawn service. Both TVOne and TV3 had obviously decided that if it was good enough for shops to open at lunchtime, it was good enough for them to completely ignore Anzac Day from then on.
Maori TV, which so often becomes the default public broadcaster these days, did a great job, but I had to wait until after 10 pm to watch Dancing in the Sky, a docmentary about  the first airman to win a VC, in World War I - who just happened to have a Maori grandmother. It was very good, but a bit late - ensuring many potentially keen people would have missed it.
Lately I've been immersed in reading Harvey's journal. He kept it for about ten years, until he started his blog in 2009. The lovely thing about it is that it brings back for me all those days, weeks, months, years of ordinary life, when nothing particularly extraordinary happened - the days that make up the fabric of a happy relationship, but then slip away into the past and are so hard to recall.
What he writes wouldn't be of much interest to anyone except me. He records what each of us did each day, what we ate, where we went, who we saw - and what we watched on TV. One of the things that astonished me was how much better the programmes were then. This isn't just rosy-tinted nostalgia. As well as brilliant programmes like Whose Line Is It Anyway and Frontline (the Aussie satire on current affairs shows), the art of making good local documentaries was much more in evidence.
But now? Most nights of the week, finding anything even faintly worth watching in prime time is well-nigh impossble. And no, I don't think getting Sky would help much. There are only so many Grand Designs and war footage compilations I can cope with.

First, I'd like to thank everyone who's written or spoken to me about the interview on Nine to Noon last week, or has made earlier comments on this blog. It's been very heartening, and reassuring.
I did, and sometimes still do, feel rather nervous about "going public" in relation to an experience which is very personal, and therefore might be seen as something that it isn't appropriate to speak of even in a blog, let alone on national radio. But as far as I could see, everyone who took the time and trouble to respond understood what I am trying to do.
As I said in the interview, I'm a writer - and so was Harvey. The way we make sense of what's happening to us is by writing about it, and talking about what we're writing. What's more, when you can no longer talk to the person with whom you used to share your life, and in particular you can't talk to them about the experience of losing them, writing enables you to feel that you can speak about what's happening to you in a different way. And that's exactly what I'm trying to do in my writing - give the sense of a voice speaking to the reader.
Not all of this writing is made public - some of it is solely for me. But most writing is meant to be read, or "heard", by others, and that means "publishing" it, making it public, either here or in the memoir I'm putting together. The hope is that they will find it relevant to their own lives, and perhaps even useful, if only because it shows that someone else is having a similar experience to theirs. But before it can be useful to them, it has to be useful to me - and that's why the need to make sense of my life for myself is where I start. A ribbon of garden

When we moved here, the lawn between the house and the fence had a number of roses and three camellias dotted around. Harvey was still able to do some gardening then, and he had very definite ideas about what he wanted to change. So we took out the two least attractive camellias, letting much more light in on the struggling roses along the fence, and added a neighbour's gift of the apricot abutilon. For his birthday Ali and David gave us a lovely red Dublin Bay climber to plant in the gap opposite the sitting room, right where Harvey could see it. But it still looked very spotty, everything dried out quickly, and when I had to take over I found it hard to keep up the watering.
When Ali stayed with me the week after Harvey died, she thought about my garden. A little later on, at exactly the right tactful moment, she talked to me about the idea she had for improving it: digging up the lawn along the fence in a long curving ribbon shape, to take in all the plants, and covering it in mulch to keep the soil damp.
Hopelessly ignorant about gardening as I am, I could see straight away that it would both look much better and be much easier to manage. Somehow the prospect of making a real change like this gave me something to look forward to and really lifted my spirits. I did wonder what Harvey would have thought of it. But long before he had said, very sadly, that it was now up to me to manage the garden and he'd just have to take a back seat. Besides, he usually approved of what I did, once he saw it.
So when Ali arrived yesterday to make a start, I felt both delighted and also slightly daring, making quite a big change to the landscape on my own account. We laid out the hose to get the right shape, then she dug a beautiful line all along it, cutting out the lawn into neat squares and using them to build up the soil along the fence, where it sloped away. 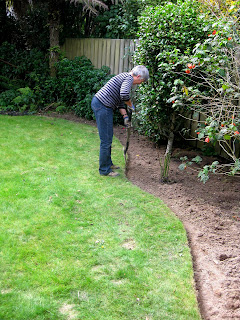 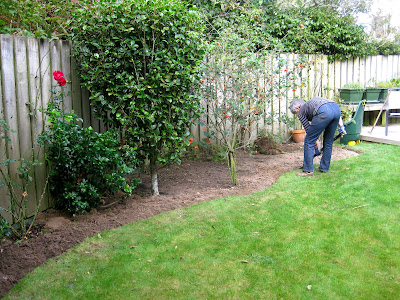 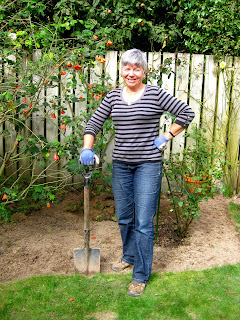 I was amazed how much she managed to achieve. By mid-afternoon I had a whole new layout and it looked so much better. Instead of just being dotted around, all the plants were contained in a lovely curving ribbon of garden that looked as if it was meant to be there. Later she and David will bring the mulch, and once we've spread it I can think about what else I could plant in the gaps - only knowing my limits, everything will have to be as sturdy and undemanding as possible. Maybe some kind of daisy...and definitely a lemon tree.  It feels like my garden now.

I've been back for a week, and until tonight I thought I was managing really well. I embarked on a comprehensive reorganisation of the upstairs, working out how to change my workspace, bedroom and spare room so they would work better for me, and in the process sort, clear and get rid of the accumulated caches of Stuff - photos, papers, sewing, clothes, cards, saved wrapping paper - lurking conveniently out of sght up here. (I've always known that the best thing about having an upstairs is that you can so easily stow messy stuff away out of visitors' sight.)
Moving furniture around was the easiest and most entertaining part, even though some of the moves didn't work and had to be undone (and I'll need to get strong helpers for the final shift, bringing Harvey's desk upstairs). Today I finally got round to the hardest part, the actual stuff sorting.
And of course there were the cards, and the photos - the last few years back before Harvey became ill, that I'd never got around to putting neatly away in albums, but had just bundled together when we moved. Christmases at Farm Road and in Auckland, Waiheke holidays, even some spare, faded copies of our 25-year-old wedding photos. Good, I thought, maybe I can get some restored versions done of these.
I suppose it was inevitable that after all that revisiting of the vanished past, I crashed at dinner time and felt really miserable sitting at the table, eating unexciting leftovers and watching crappy TV for the company, and for fending off the awful quiet of a house with no one else in it. I know this bad patch won't last, but when you'e in it that's not much consolation.

PS: And then, of course, by the time I'd written this post and realised it was time to do one for Something Else to Eat and written that too, I felt better. And today (Friday) in came the warm comments from Deborah and Julie - thank you, you're wonderful.
Posted by AnneE at 8:57 PM 3 comments: