When people ask "How are you?", I don't really know what to say. The truth is that no matter how many uplifting pictures of flowers and gardens I post here, or how many lovely supportive comments everyone makes (and I do appreciate it, please keep doing it!), I'm just not that great and there are times when I really can't see the point of anything at all. Yes, I know I haven't been well and I've just finished the antibiotics, etc etc. But I can't escape the reality: I am on my own, and some days I don't have the faintest idea how to manage my life even till bedtime. And writing this blog to say so is sometimes the only way to avoid going to bed and staying there.

PS: For the New Yorker jigsaw site I mention in the fifth comment below, go here. Really silly, but It works for me...
Posted by AnneE at 3:43 PM 9 comments:

I've been lying low in both senses lately. Last week I had a dear friend visiting, and for once it was fine (though very cold). We fitted in tulips and seaside cafe lunches and generally mooched happily about. Last Thursday would have been Harvey's 78th birthday, so it was lovely to have her here for dinner - especially as she was the person who originally introduced us.
But then she went home and I collapsed again, still dogged by what I thought was just the stubborn aftermath of a cold. It's been five weeks now, so I finally went to the doctor, who told me what I really have - the adult whooping cough that's been doing the rounds.
Now I'm on the right antibiotic and feel as if I'm starting to improve at last, though I still don't have much energy and my taste buds aren't properly restored yet - wine is the acid test, so to speak. I've resorted instead to regular nightcaps of Harvey's whisky with lemon cordial and hot water (sugar is the one thing I can taste properly). But I reckon what I need most is a good long spell of warm sun, and there's no hope of that for a while yet.
Instead I'm devoting myself to giving my food memoir one last going over before I hand it back to the publisher, Awa Press. And I had a nice little boost this week. I entered a story for the Grimm Fairy Tale competition (the first one I've ever written), called The Three Cheeses. It was one of the five also-rans singled out for praise by judge Kate de Goldi, as "a clever riff on the trialling of suitors within comtemporary foodie culture". You can read the winning story in the latest Listener, and Kate's report is on their website here. On such eagerly gobbled crumbs is a writer's life sustained...
Here are this year's tulips. Nothing like the glorious ones in the botanic gardens, and not quite how they looked on the packet - it didn't show any white ones -  but never mind. 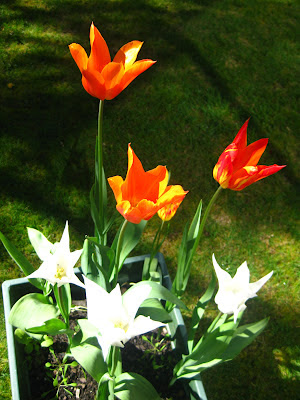 To everyone who has called, written, phoned or posted me about my birth mother, and the dear friends who looked after me last Monday evening, thank you. It poured all morning the day of her funeral, but by the time we got to the church in the afternoon, the rain had stopped. She had been a committed, active member of its congregation ever since she came to New Zealand at the age of sixteen. Together with the family, they made sure that her whole life, full of courage and love, was fully recognised and celebrated.
She loved her garden, and I took a little garden of spring flowers up for her. 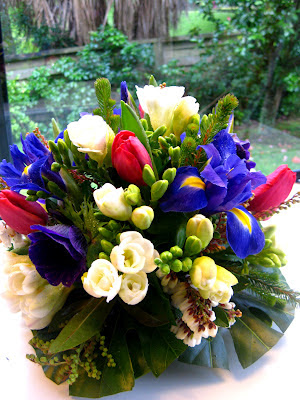 When I got home I brought my just-emerged daffodil - it was the first one I'd  ever planted myself, supervised by Ali - inside for her, and for me. 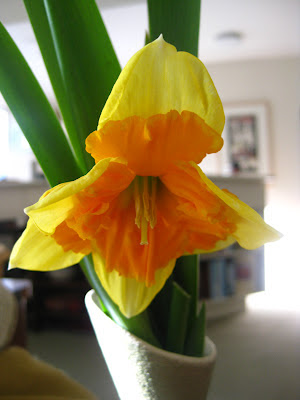