Roses from my builder

This is another post related to my bathroom, but in a tangential way. Larry, the builder working on it, has been sorting out our houses for a long time. He goes right back to the first house Harvey and I bought together, in Woburn Road, Northland, not far from Larry's own home.
When we moved to Karori, he came round to build us a deck at the end of the garden. This required taking out a pretty pink rose planted by the previous owner. By that time Larry was building himself and his wife Chris a new house in Waikanae. If we didn't want the rose, he said, he'd like it for his new garden. So he carried it off and it flourished. He and Chris named it the Harvey rose, and told Harvey how well it was doing.
When he arrived on Monday morning, he presented me with two beautiful buds from it. In the warm room, they've opened up into my favourite rose shape: a round cup with a cluster of whorled petals in the middle. I've had a look at a website showing the different forms, and I think this is a rosette shape - but I'm not entirely sure, it might be a quartered shape. If anyone knows, please tell me. 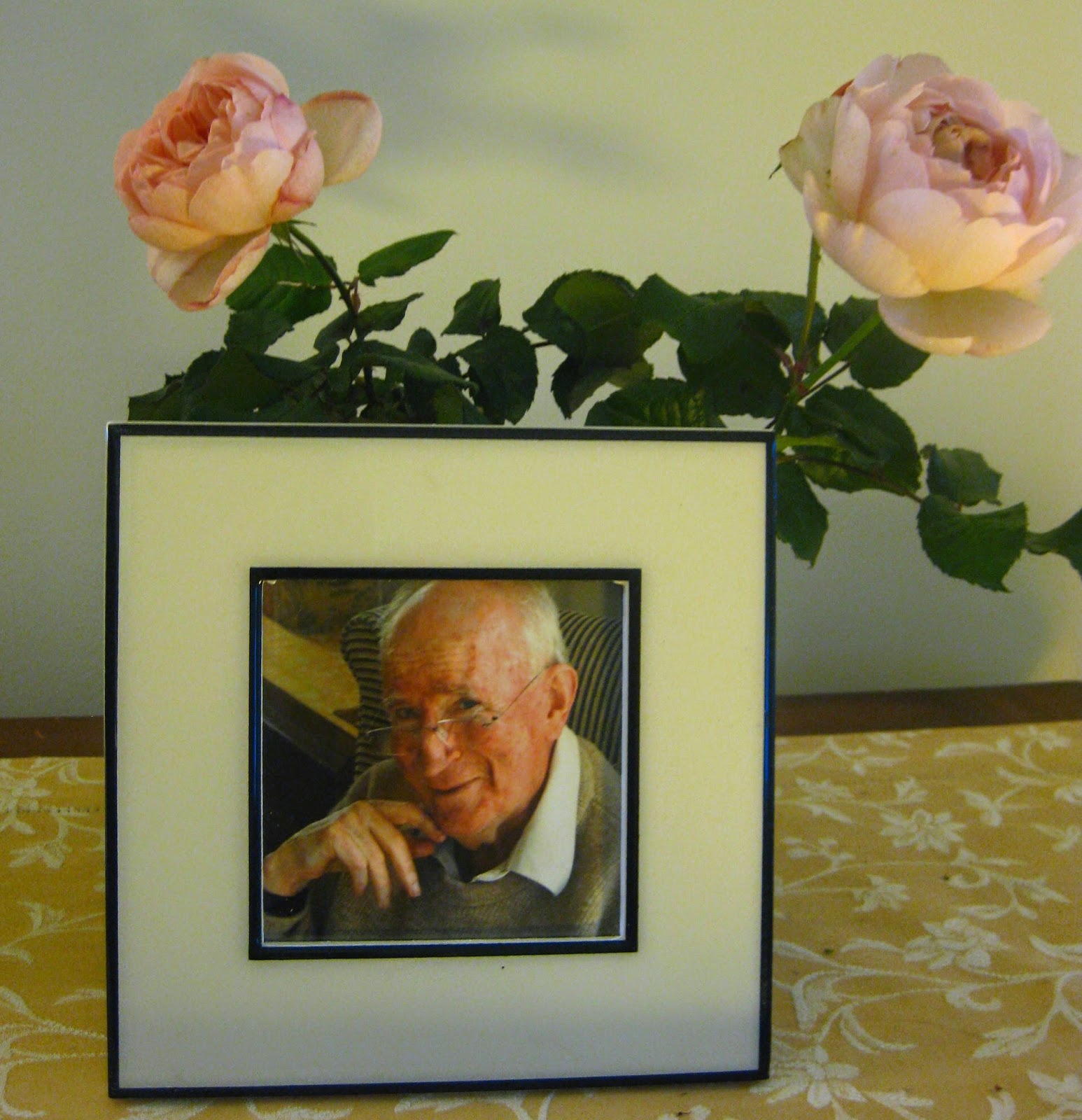 Tomorrow my plumber and builder start work on renovating the bathroom. My back bedroom is full of mysterious cardboard boxes holding all the fittings, and beside me on the landing is a gleaming new bathroom sinkbench and lovely long drawers. (I've decided I'm not going to use the stupid work "vanity" any longer. What's vain about cleaning your teeth, washing your hands and combing your hair?)
This is the first (and will probably be the only) major house project I've tackled since Harvey died. I know this is really silly, but although I'm looking forward to the new bathroom and I know I'll enjoy it, I can't help feeling a bit sad. It's partly because the old bathroom was here when Harvey and I moved in, and for the first two and a half years, until he had to move downstairs, we both used it. I don't like doing away even with household things he used, let alone surroundings he knew and lived in. But also, it feels very strange to be making changes to the house that I can't consult him about and he'll never see.
We were lucky - we always agreed exactly on the houses we bought, three of them altogether. There wasn't quite the same concord about doing them up. Like many men, Harvey wasn't very keen on changing things, and he couldn't visualise colours and shapes in spaces the way I can. I once left him alone to work in the garden with a builder (not the lovely one we found later). Big mistake. Between them they constructed a hideous over-sized Fort-Knox-like structure of half-round logs right along the side of the top lawn in Woburn Road. On the other hand, when I found a wonderful stripey velvet to recover our old armchairs, Harvey was sure it would look awful. But I was so convinced it would work that I told him I was going ahead anyway. I promised he would like the result - and he did.
He would certainly have agreed that the bathroom needed upgrading - the old fittings are falling to bits - but goodness knows what he would have thought of my choices. Oh well, of course it's entirely up to me now and I can have exactly what I want. But it's not as much fun doing it all by myself. Much nicer to have someone to discuss it with, even if it means having to work out what would suit you both.
I did try to think very practically, as he was good at doing, as well as about what would look good. I think he would have liked it all. But he might have been a bit bemused by the two vases I just bought on Trade Me (amazing how clever you feel when you put in the winning bid for something you really want).  A friend's getting the red one, and the white one's perfect for the bathroom.