China was great and I meant to do a proper post this week, but unfortunately fate intervened in the form of a really nasty stomach bug. I've only just started to feel slightly better, so I hope to catch up later this week.
Posted by AnneE at 9:10 PM 2 comments:

I know Harvey died a year ago, but sometimes that feels like a long time, and sometimes it feels very short. And now it feels strange to no longer be able to say, or think, "my husband died last year".
I haven't exactly made any new year resolutions, but I have come to a sort of general resolve: I need to try to live, as much as I can, in the present, and look ahead to the future, rather than turning back to the past. It's not easy; and not only because of the obvious, inescapable fact that I have more years behind me than ahead of me. As for many people my age, of those I've been closest to in my life, more have died than are alive. And I don't have any grandchildren to draw me on into the future.
But the past is a place to look back on, not to live in. Neither Harvey nor Patrick would have wanted me to dwell there. Both of them had an enormous zest for life and for making the most of their time, something I've often not been very good at, even when they were here with me.
So now I'm off to China to see my son Jonathan, while my visiting friend looks after the house. It's the third time I've been, and I've got to the stage where I enjoy going back to familiar places almost as much as I love seeing completely new ones. There'll be some of both on this trip, and once again I'll have a close companion to share it all with.
Of course it's not the same and it never can be, I know that. Harvey and I travelled very well together, though of course, since we were both bossy and each thought we knew best, and strange surroundings stress you out a bit, there would be the occasional disagreement (to put it politely) about where we were, where we were going, what we should do next, where we should eat...
In China there are no such moments, because Jonathan knows his way around and I don't. He also knows what I will like. What's more, I can't read a single word I see, it's all just pretty decoration to me. So I just trot round obediently after him, and it's very relaxing.
It will be a good start to this new year, and to living in the present. And in three weeks I'll write about it here. By then we will be in the year of the dragon, a very auspicious sign, embodying beauty, creativity, energy, confidence and fearlessness. 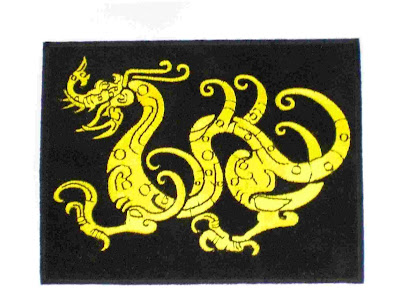