Thanks to friends and family, I can say that I had pretty much as good a Christmas as possible this year.  I didn't realise until I got to Saturday that for me, it would feel like the day Harvey died, rather than Christmas Day itself, because the 25th was a Saturday last year. Fortunately a dear friend who has troubles of her own invited me to join her, and we took very good care of each other.
The astonishingly fine weather helped a lot too - it lasted from Thursday to Wednesday, which must be some kind of record for Christmas in Wellington.  On the Sunday I was with people from 9.30 in the morning until 10 at night, and then I talked to my sister on the phone for another hour and three-quarters. By the time I'd finished clearing up and got to bed, it was after midnight.
I had been dreading Boxing Day, thinking everyone would be occupied with their own affairs, but again I was taken care of for most of the day. And so it's gone on all week, I've always had something else to look forward to, enabling me to get through the patches of time on my own without going under. (And all the wonderful food has been a great pleasure and distraction too - see my other blog.) So although I couldn't quite manage it for myself, I've been able to wish others a happy Christmas, and mean it. 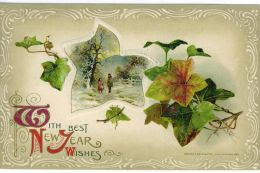 Since my little rant last week (which everyone was so nice about!), quite a lot has happened. Harvey's plaque ceremony went very well indeed. After dire forecasts for rain and gale force winds earlier in the week, it was cold but, thank heaven, fine. We read poems and spoke about him and walked home to have lunch together, and I thought "what a great group of friends". Here are the two poems I read. The first one, by Harvey, came at the beginning. It's the final one from his book "Room", which had a poem for each room in the first house we bought together.


Beyond the laundry clutter, out the back
patio, pumpkin, borage, ginger lily,
compost, worms, bees, snails,
cats, sparrows,
the bank held temporary by ivy and convolvulus
once a tui called to check the flax.

There is room for everything.

Folly, magnificence the whole thing,
dew on cobwebs,
paint peeling off the house,
mortared brick,
any fresh start
spinning satellites defying common sense,
The embrace of a place
& one another.

The second one, by Janet Frame, I read at the end. The evening before, I had picked up Harvey's last anthology, These I Have Loved, and the book just seemed to fall open at this poem.

If poets die in old age
they live their own lives
they write their own poems
they are their own might-have-beens.

Young dead poets are prized comets.
The critics queue with their empty wagons ready for hitching.

Old living poets
stay faithfully camouflaged in their own sky.
It may even be forgotten they have been shining for so long.
The reminder comes upon their falling
extinguished into the earth.
The sky is empty, the sun and moon have gone away,
there are not enough street bulbs, glow-worms, fireflies to give light

and for a time it seems there will be no more stars.

Since Sunday, I have remembered that Harvey loved Christmas, and I'll do my best to enjoy it as much as possible. So now the house is full of flowers, and tomorrow night I'll put up the crib with the figures my son painted for me years ago. Here's how it was for Harvey's last Christmas in 2009. Thank you for reading my blog this year, and I hope that over the next week, you all have the best time you possibly can, with the people you love. 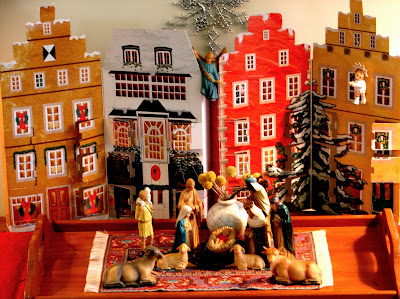 Just a little over a week to go until Christmas, but right now I'm focusing on this Sunday, because we're having a small gathering then to "unveil" Harvey's plaque.  Of course it isn't really an unveiling, more of an unplasticking, because we'll peel back a piece of black plastic. I keep making lists of all the things I need to do before then, in case I forget something vital. Unfortunately the forecast isn't good, but I'm hoping it will just be showers and not settled rain. I think I'll feel both better and worse when it's over - I'm pleased to have the plaque completed, but it also feels like the last thing I can do for him; after that, there's nothing for it but just to carry on alone, through Christmas and beyond.

It's been, well, interesting over the last week or so, as the cards have started to arrive and the get-togethers have got under way. In a spirit of pure helpfulness (what else?) I thought it would be good to set down a few insider's hints on how and how not to deal with people like me at this time of year.
1. Cards require more thought than usual. Try not to send your bereaved friends and relations Christmas cards that are overly cheerful and upbeat. Jolly Santas etc. should be avoided in favour of something a little more soothing - doves or other birds are good.
2. Cards that feature messages urging the recipient to have a "merry", "jolly" or "wonderful" Christmas/holiday/festive season/New Year, when that is the last thing they'll be doing, will not go down well. A simple "Season's Greetings" is fine. Writing something inside that shows you've remembered what's happened since last Christmas, and know merriness is off this year, will be greatly appreciated.
3. At seasonal gatherings, try not to wax too eloquent about the happy holiday you're about to have with your partner. On the other hand, don't go in for arch complaints about having your partner around either. Doing either of these things will just hammer home the fact of partnerlessness.
4. Don't ask the bereaved person what he/she is doing at Christmas unless you really want to know. And don't make vague noises along the lines of "must have you round some time after Christmas" (often followed by "Of course we're away for two weeks, but maybe after that...") If you really do want and intend to have them round, come up with an actual day/night they can put in their (often alarmingly blank) post-Christmas diaries - the details can be sorted out later.
5. Please don't try to buck the person up by pointing out that there are many worse off than them, and/or helping some of these people out would be a great way to take their minds off themselves and their own troubles. They probably won't tell you to sod off, but they will want to.
Posted by AnneE at 10:41 PM 6 comments:

The ghosts of Christmas past

As I'm sure everyone who reads this blog will understand, I'm not exactly looking forward to Christmas this year. I'll be with friends on the day itself, of course, but that still leaves Christmas Eve, and Boxing Day, and all the rest of it. We used to love Boxing Day, we would sit around and nibble on leftovers and read our Christmas books, outside in the sunny garden if we were lucky, with a glass of Harvey's home-made ginger beer.
Of course I'll Manage, as other widows and widowers do. I'll Take Steps to make sure I've got things to do and people to see. But the ghosts of Christmas past will inevitably come crowding in, all the same.
Meanwhile the roses are out. My own Remember Me rose, the one we planted two gardens ago for Patrick, has definitely survived last summer's ordeal by weedkiller, but it's not going to do much in the way of flowering this year. On Monday my heighbour Jenn came over to bring me the first bud from hers. Now it's gone from its deep russet early colour to full salmony bloom. Here it is with a photo from Farm Road days. 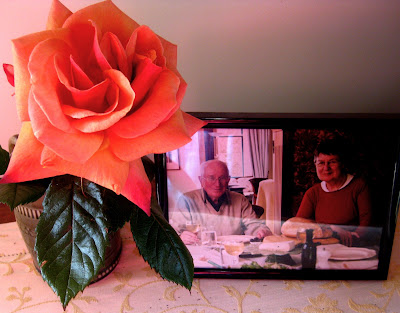