Last week I went to the Unity Books launch of two poetry books elegantly published by Cold Hub Press: Michael Jackson's Walking to Pencarrow, and a collection of new and selected poems by Diana Bridge.
Harvey and Diana had a strong bond. She lives close by, and visited him here in his last years. When she phoned to invite me to the launch, she told me that the new book included her poem for Harvey. So I went, and wore my Chinese jacket in her honour.

But I hadn't quite realised how significant an evening it would be. In her speech, Diana said how pleased she was that, as Harvey's widow, I was there. Then she read the book's title poem, "In the Supplementary Garden". It was the poem in memory of Harvey.
I should have remembered it from six years ago. In May 2010, Mark Pirie had put together an issue of Broadsheet: new New Zealand poetry (No.5), which featured an interview with Harvey (by email, because of his declining health) and six poems by him, along with poems by Mark himself and another five friends of Harvey's: Fiona Kidman, Ian Wedde, Paul Hill, Michael O'Leary - and Diana Bridge, who contributed "In the Supplementary Garden".
I was deeply moved that she chose it as the title poem for this collection, adding his name on the page, and as her reading for the launch. It's so strikingly appropriate for him, as poet, gardener, and friend, "nearing the end of his journey". He died seven months after it was first published. 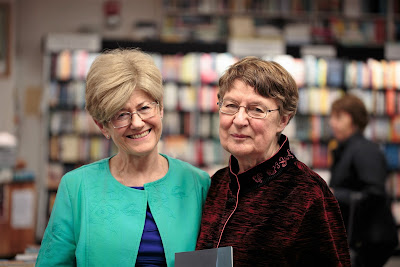 In the Supplementary Garden, light spills down
on an excess of contrast, leaves are every shape in the pack,
their greens spiked here and there with ox-blood, amethyst
and a radiant shade of lime. Barks are crazy-paved
or smooth as parquet. There are no rules –

except for spontaneity. With each twist of the path, we fall
as though into a new movement, and yet throughout
a garden that has charmed the eye of generations,
one mode prevails. Distant gazebo and pavilion
roofs are transformed into fans. Above our heads

a prow of shadowed wood is breasting the pale wave of the sky –
see that and, like the Immortals, you could soar anywhere.
Each tree and upright stone set at the water's edge
has grown a shimmering twin. We watch each pair
break into halves  –  and instantly re-form into

a glimmering whole in a wondrous conversion of things.

Slabs of rock, their faces ground and grooved as any sage
nearing the end of his journey, have made an amphitheatre
of the pool. Plants coat its rocky lip; they trail over it
like children's hands that reach for water, stopping
just short of the surface. A mat of lotuses that lies

as langorous as a woman on her side is starting its slow
slide into openwork. As smoothly as a corps de ballet
flowers glide apart – they'd have us think forever.
We want it to go on, this sunlit comedy, knowing it can't,
that the curtain must come down on all performance.

The afternoon has deepened, burnished as though by elegy.
A last butterfly of light plays on the pavilion floor, coaxing
its worn diagonals into harmony with the pleated lines
of the roof. It is that numinous, if unattested, time when patterns
of earth and sky combine, when black and white draw close

and then entwine, enacting the same spiral of conjunction
figured on a symbol from who knows how old a past.
It would take words as hand-picked and artless as the trees
in this old garden to convey the presence of that fullness
in this fading. Nearer still to evening, you find a way to tell me:

It's acceptable – it may be better, even – that it doesn't last.


(Author's Note from Broadsheet: In 1979, before it had been restored, I visited the Humble Administrator's Garden in Suzhou, of which the Supplementary Garden forms part. Coming across photographs of it 30 years later in Maggie Keswick's influential introduction in English, The Chinese Garden, became the catalyst to writing. I offer the poem that resulted to Harvey, a maker of both actual and literary gardens.) 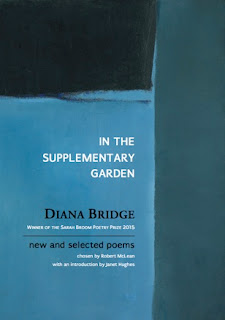 has published five books of poetry with Auckland University Press. In 2010 she received the Lauris Edmond Memorial Award for her distinguished contribution to  poetry. Her essay “An attachment to ” won the Landfall Essay Competition for 2014. She has a PhD in Chinese classical poetry from the Australian National University, has studied and researched Chinese language, literature and art history and early Indian art history, and is the first foreigner to have taught in the Chinese department at Hong Kong University. In 2015 she was invited to take up a residency at the Writers' and Artists' Colony at Yaddo in upstate , the first New Zealander since Janet Frame to go there. She also won the 2015 Sara Broome Poetry Prize.

IN THE SUPPLEMENTARY GARDEN has selected poems from Diana's five previous books, along with 23 new poems, the last of which is the title poem. Poems chosen by Robert McLean, with a superb introduction by Janet Hughes.
Cold Hub Press, $39.95.
Posted by AnneE at 3:05 PM 1 comment: