...and two days. Incredibly busy for much of the time, with all the things that have to be done - the legalities, of course (more on this later), getting ready for my son and his friend arriving, and organising the public memorial service. In other words, not exactly normal life, whatever that means.
But I'm now sleeping more or less normally, which is a huge help. I was racing to get as much as possible done before Jonathan and Eric arrived last Wednesday, and I'm really pleased I did that, it's given me time to enjoy having them here, though I won't really relax until after Friday is over. Then we'll have two weeks to go on picnics and explore Wellington properly.
They fill the house with welcome human sounds, and it's lovely having cups of tea made for me and the dishes done - it's been close on three years since Harvey was able to do those things. I don't miss the work involved in looking after him, or the worry. I just miss him - especially his voice.
Perhaps having the company of the "boys" - I can't help calling them that, though they're actually in their mid-forties (I was a child bride!) - will make it worse later when they've gone. But that's just too bad, I need them here now, not least because they give me something new to think about and respond to.
Meanwhile the cat is showing signs of improvement - glossier fur, good appetite - so maybe she'll be around a while longer than I thought. The week before last, I saw a white tiger cub in the window of the toyshop over the road and had to go in and buy it, crying all over the counter. Harvey loved tigers. Now Dorothy likes to sit near it on the bed. 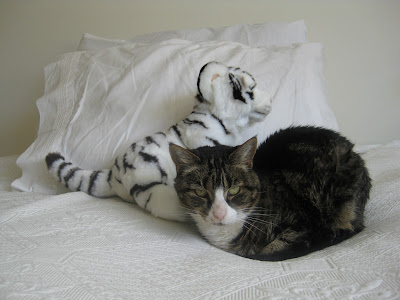