Appalling how your world narrows down when you're ill. I had a relapse this week (very common with campylobacter, apparently) and had to go back onto antibiotics. I felt as if I'd gone almost back to square one, two weeks ago. But they seem to be working really well, thank goodness. You may not want to know this, but today is the first day I've been to the loo just the once.

With any luck, it won't be too long before I can start going out again properly, and eating something beyond yoghurt, applesauce, broth, bananas, jelly, dry toast, rice, boiled eggs and occasional bits of fish. (Instead of nice food made by me, there are nostalgic pictures of Chinese food over on Something Else to  Eat.) Fortunately I've had some urgent editing work to keep me occupied, and reviews to write, and kind friends have come to visit when I've been up to it. 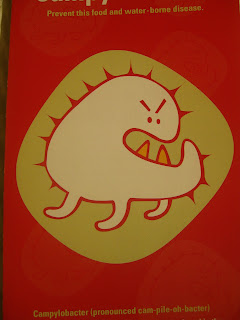 They do understand that despite the notoriously nasty nature of this infection and the remarkably ferocious way the usually reticent Ministry of Health portrays it in their helpful leaflet, they won't catch it just by being near me.

But I really am getting pretty bored with it all the same. When I think how long Harvey had to put up with feeling grotty and feeble and not being able to do anything physically or even enjoy his food much, I wish I'd told him more clearly how brave and determined and admirable he was.

Anyway, let's hope that my hero Erithromycin has done for this particular evil creature this time, and (with apologies to Lewis Carroll) set the poor beleaguered Tumtum tree to rights.


He took his vorpal sword in hand:
Long time the manxome foe he sought --
So rested he by the Tumtum tree,
And stood awhile in thought.
And, as in uffish thought he stood,
The Jabberwock, with eyes of flame,
Came whiffling through the tulgey wood,
And burbled as it came!
One, two! One, two! And through and through
The vorpal blade went snicker-snack!
He left it dead, and with its head
He went galumphing back.
"And, has thou slain the Jabberwock?
Come to my arms, my beamish boy!
O frabjous day! Callooh! Callay!"
She chortled in her joy.
Posted by AnneE at 10:46 PM