I missed posting here last week because I was feeling too low, in that awful state where everything seems completely pointless. I think it was partly the aftermath of being ill, and partly the fact that my wedding anniversary was coming up and I wasn't sure how I would cope with it. The frightful "summer" didn't help eiither - this week it was officially confirmed that Wellington has had the least sunshine and fewest warm days on record.
But dear Ali came round last Thursday and that made a big difference. Then on Friday I was whisked in to TVNZ's Wellington studios to appear on Close Up, talking about adoption. And fortunately, weeks ago I'd organised a long late lunch for 3 March, as a belated 50th anniversary present for friends (see Golden). I produced a five course lunch and thoroughly enjoyed myself  (I'll put a post up about it later this week over on Something Else to Eat). 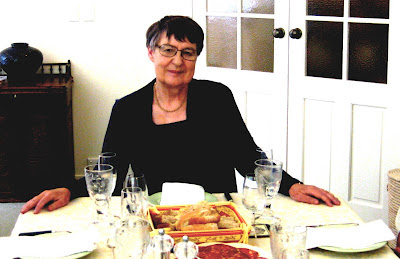 I knew I'd probably feel rather flat when everyone went home, so I arranged to go round to my neighbour's and watch a DVD. As my contribution, I took round delicious leftover bits of the last course (strawberries, slices of chocolate salami, and a few stray truffles), plus the dessert wine, and that all went down very well indeed. All these goings-on seem to have turned the tide, and I've felt much better since.
Posted by AnneE at 8:29 PM