No-show last week because I went to Auckland to see family and friends and some pictures. The Degas to Dali exhibition at the redone Auckland Art Gallery was entirely satisfying, partly because of the outstandingly good text that went with it - it sounded like (and was probably by?) my favourite NZ art expert, Mary Kisler, who told Kim Hill it was the best exhibition she'd worked on. It's on till 10 June.

And then I saw an ad in the paper for a Frances Hodgkins exhibition at the Jonathan Grant Galleries in Parnell, so we went to that too. It included the rescued 1930s black chalk drawing "The Sitting Room", which had been used as a kitchen cupboard door in a student flat in Canterbury, England, and was thrown into a skip during renovations - read the full story here. There were also a number of works which had belonged to Hodgkins' close friend Jane Saunders (the Hocken LIbrary has a lovely double portrait by Hodgkins of Jane and her partner Hannah Ritchie). For a moment I had a mad impulse to buy one, but of course calmed down and bought the catalogue instead.  You can see all the works, which span 1901 to 1947, at the excellent online site here.
So what with all this absorbing art, and spending decent lengths of time with friends and family I hadn't seen for a while (including meeting my new great-nephew), and the glorious weather and good food, I had a pretty nice time. For no particular reason, I suddenly lost it on the bus coming back from the airport, but the messages on my answerphone pulled me out of that trough and set me back on my feet again.
Now I have two new editing jobs and three book reviews to do, so that will keep me occupied for a while. And tonight I went to see Geraldine Brophy and Jane Keller in the last night of Floral Notes, a wry, moving, stylish piece (they wrote it themselves) about the numerous species to which I belong, but which is still all too rarely seen on the stage - older women. 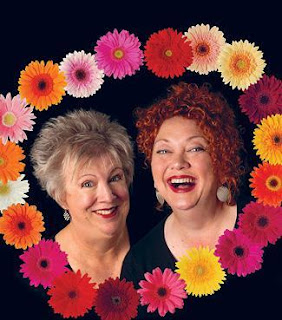