As I mentioned on my Facebook page, I recently had an email about one of Harvey's poems from Ruth Arnison, of Poems in the Waiting Room. It's an arts in health charity, based in Dunedin.
"Our aim is to provide a free source of well-chosen poetry for patients waiting for medical appointments, rest home residents waiting for meals, outings or appointments, hospice patients and their families and prison inmates. The poetry cards, A4 sized three-fold cards, feature between eight and ten poems. New editions of the cards are printed and distributed every season. Poems include those from contemporary poets (especially New Zealand writers), older poems, a haiku, and poems for children. They are selected for readers’ enjoyment and are in no way a vehicle for delivering any social/health messages. The cards may be read and left on site or taken away for sharing or further reading."
Ruth wanted to use "Giverny in Autumn" for a new card. Of course I immediately said yes - Harvey would have been delighted. She wrote back telling me why she'd chosen it: "I spent a month in Italy and France two years ago and Giverny was the highlight of my trip. When I came across Harvey's poem I was immediately back on that famous green bridge - how poetry can transport one."
We went to France in 1999. Staying in Rouen, we'd arranged to meet two English friends, who came all the way from London to see us for the weekend. They had their car, and suggested going to Giverny on the Sunday. We were so lucky - it was 31 October, the last day Monet's house and garden was open to the public. But it was fine, and we wandered around hardly believing we were actually there. Our friends took our photo on the bridge. 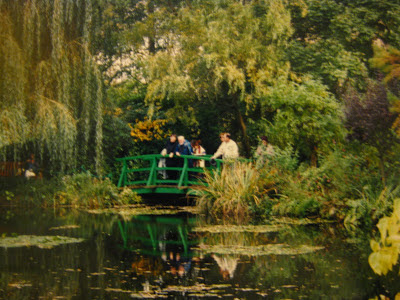 I wrote an article about Giverny later for Next magazine, and Harvey wrote his poem.

the grace of willows
weeping light into the .

A frog on a pad.
no princess to hand
the figure's disappearance
from the artist's canvas.

Up close, mere daubs
of paint - tactile texture -
but in vista how they shape
into a space, a green bridge
reflections, clouds as they
were at the turn of the century
as they are now at its end.

The calligraphy of a place
the copious confusion of autumn leaves.