In the supermarket today, I was once again being shouted at by someone trying to tell me what to buy. A shop assistant was filling up the bin of oranges, so I (very unfairly) told him how much I disliked being hectored by this disembodied voice while I was shopping. He said, with great feeling, that he hated it too - and I immediately realised that it's so much worse for the people who work there, they have to put up with it for hours.
I hate being shouted at in writing even more. Fortunately there seems to be a wealth of quietly spoken, deeply considered writing on offer. I'm now reading The Burgess Boys, the new novel by Elizabeth Strout (the author of Olive Kitteridge). It concerns a family of two boys and a girl who grew up in Shirley Falls, Maine. Only the girl, Susan, has stayed there; Jim and Bob have both moved to New York. A peculiarly contemporary crisis with Susan's son, involving the town's new Somali community, brings them back one autumn:


"In Shirley Falls the days were short now, the sun never climbing very high in the sky, and when a blanket of clouds sat over the small city it seemed as though twilight began as soon as people finished their lunch, and when darkness came it was a full darkness. Most of the people who lived there had lived there all their lives, and they were used to the darkness this time of year, but that did not mean they  liked it. It was spoken of when neighbours met in grocery stores, or on the steps of the post office, often with an added phrase of what was felt about the holiday season to come; some liked the holidays, many did not. Fuel prices were high, and holidays cost money."

The whole book is perfectly balanced, and all the more moving for its calm, quiet, comprehending voice. 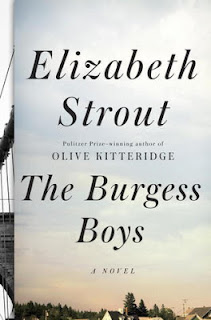