A night at the Grand

We're always being urged to "follow your dream" - but sometimes it doesn't turn out quite how you expected. Note that I'm carefully not saying where this hotel was - and I have no idea (if it's still there) what it's like now.


My mother-in-law has just finished telling us, for the 329th time, the story of not being invited to her great-niece’s christening. I can’t help myself: “That was 25 years ago, wasn’t it, Joan?” “Oh no,” she says sternly, “it was 27!” I retreat early to the bedroom. Tomorrow we’re going away on our own.
We drive off straight after breakfast (“It’s not that far, what’s the rush?”) under a vast blue sky. We can spend all day negotiating the hairpin bends of steep gravel roads leading down to gloriously deserted bays, because, as usual, we’ve booked ahead. And this time, instead of a perfectly functional but entirely predictable motel, I’ve managed to talk Harvey into staying at one of those wonderful old country pubs I’ve been longing to try for years.
It’s nearly five when we pull into the carpark, with its view out over the silky waters of the h. “It’ll be even better from upstairs”, I say confidently. Murmuring about Gone With the Wind, I climb the stunning kauri staircase sweeping up to the centre of the first floor, and turn the key to our room.
Two sagging wirewove single beds, spread with limp pink candlewick. One narrow window, too high to see the harbour unless you’re standing right in front of it. A rickety oak wardrobe and a chest of drawers. One dim plastic shaded light-bulb hanging plumb in the middle of the ceiling.
In the corner beside the window, one cold tap drips slowly into the washbasin. A neatly typed notice on the wall informs us the toilet is next to the bathroom at the end of the landing.
’s face has an odd expression, but all he says is, “It’s only one night – and these places always do a great breakfast.” We go out and spend much more than we meant to on a consoling crayfish dinner and enough wine to send us both straight into snoring oblivion.
The sun wakes us too early, flashing in through the gaps between the unpullable brocade curtains and the brown holland blind. Neither of us feels up to trekking along the landing and clambering in and out of the bath for a shower. So we make do with a few swipes of cold flannel at the basin, go for a walk to clear our heads, and turn back to ask about breakfast.
The landlord’s behind the bar counting up the night’s takings. “Just through there,” he says, pointing to a carved archway.
Starched white tablecloths cover four tables, but only one is set for two, with thick white china, white napkins in silver rings, and neat ranks of heavy old silver knives, forks and spoons. Any minute now, he’ll come to take our order. Fruit, definitely bacon and eggs, maybe toast with home-made jam? “This is more like it,” I say.
Ten minutes later, I notice the narrow table against the back wall. Lined up on it are three boxes – weetbix, cornflakes, puffed wheat. In front stand a bowl of tinned peaches, a jug of milk and another of what looks like well-diluted Raro. They’re flanked by a toaster, a loaf of white sliced bread, and a saucer with two little foil-topped packets of butter, two of Vegemite and two of marmalade. “I think this is it,” says .
The landlord comes in with a kettle and a small wicker basket full of teabags and sachets of instant coffee and sugar. “Sorry, forgot these,” he says. “Got everything you want?” 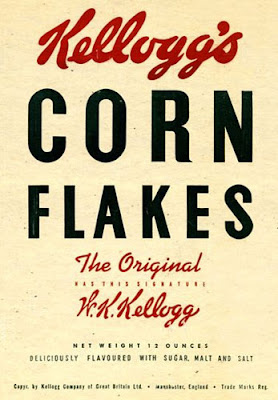