When Lyon was Lugdunum

Lyon was the most important Provincial centre in the Roman Empire. Roman Lyon began up on Fourviere hill - the name comes from Forum Vetera, the Old Forum. Julius Caesar ran his campaign in Gaul from there. Here's the men who won Gaul for him. 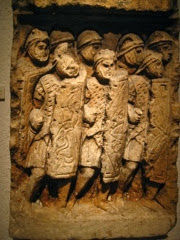 And here's a Roman sword. 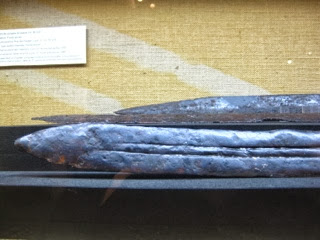 It made me think straight away of R.A.K. Mason's poem:
This short straight sword
I got in Rome
when Gaul's new lord
came tramping home
It did that grim
old rake to a T
if it did him
well it does me
Leave the thing of pearls
with silken tassels
to priests and girls
and currish vassals
Here's no fine cluster
on the hilt, this drab
blade lacks lustre
but it can stab.
In the years after Caesar's assassination the Romans built a whole new city, Lugdunum, down on the flat where the Rhone and Saone rivers met. The Emperor Claudius of "I, Claudius" fame (Harvey loved the book and the series, but he'd also read all the serious history around them) was born in Lyon. The treasure of the Gallo-Roman museum is the Claudius Tablet, where he granted local Gallic dignitaries (but no freedman, slaves or women, of course) the higher status they wanted. The whole thing, made of black basalt, weighed hundreds of tons - only two pieces of it were found. Isn't the lettering beautiful. 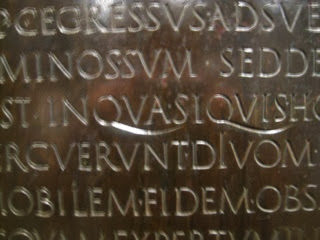 And to redress th balance and bring in some women, here's a rare funerary portrait of a Lugdunum mother and daughter, around the 3rd century of our era - they can be dated by their hairstyles. 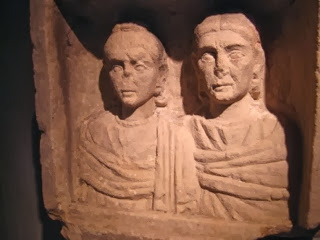