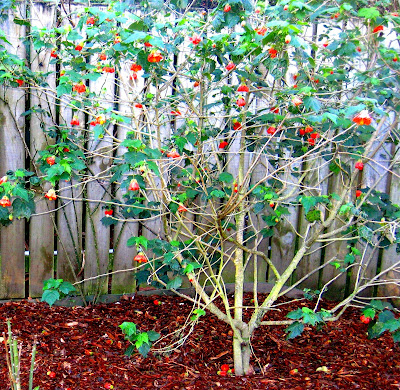 Harvey called it Chinese bells, I call it Chinese lantern, and in the USA it's known as flowering maple, but its proper name is abutilon.  We planted a beautiful crimson one at Farm Road, and it flourished. Soon after we came here, our neighbours Julie and Rob were redoing their garden and offered us a well-grown orange one - exactly the colour I wanted. Rob planted it for us and at first it did very well. But by autumn 2009 it was in trouble. Harvey wrote about it in his blog, Stoat Spring, on 16 October:

In our own garden the orange abutilon (Chinese bells) is looking very sick. A shame. Last autumn it was vigorously healthy and covered in flowers. Bruce, our lawn mower man and heavy gardener, thinks it has a virus. Sad, if so, we’ll have to get rid of it. Which leaves the question, do we plant another abutilon there?When we throw bread out the sparrows don’t worry about the health of the abutilon. They crowd its branches deliberating whether it’s safe to land on the lawn. Sooner or later one brave soul ventures down. Straight away its mates join the fray. Everything else looks healthy. The roses all have fresh shoots and new buds though the equinox winds have done damage. The lovely-scented Jude the Obscure has had its main new shoot broken off. As the camellias finish flowering new shoots galore emerge.

In fact the abutilon survived - all it seemed to need was regular watering, surrounded as it was then by thirsty grass - and Jude was fine too. After Harvey had died, Ali created the new garden bed and the abutilon, like the roses, flourished. This year it was covered with flowers, and the birds flocked to them. Every evening at least one and sometimes two or three tui hung upside down from its branches, sticking their beaks up inside the orange bells to get the nectar.
But in early spring, before I went overseas, it seemed slow to get its new leaves. When I came home last week it was looking very ill indeed. There were new flowers and leaves at the very tips of some branches, but they quickly withered and turned brown.
Today Ali came to work with me in the garden. I showed her the tree and she pointed out the big borer holes in its trunk. She sawed through some side branches to check. No good - the whole tree had been attacked. No wonder the flowers were dying. It would have to come out.
I know that's how a garden works - plants die, new ones take their place - but I hate losing anything that Harvey knew, especially plants he loved. I'll plant a new Chinese lantern, as he thought we might, but it won't really fill the gap. At least Jude is still here - we moved it to a new place, where it looks perfectly happy.
Posted by AnneE at 10:40 PM