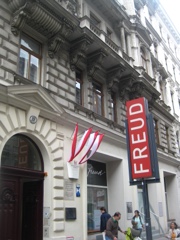 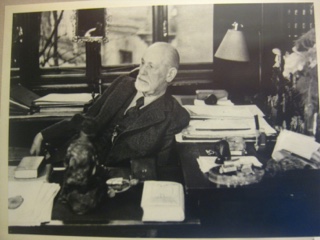 Sometimes history seizes you by the throat.  I put up a post on Facebook recently showing my first coffee and cake in Vienna. I had it at an attractive old place I found near our hotel, Cafe Eiles. Later, wanting a photo of the interior with its faded tapestry banquettes and round marble-topped tables, I looked it up on the Internet.
There's been a cafe on this site ever since the building went up in 1840. Cafe Eiles itself dates back to 1901. Eiles means rope. On 23 July 1934, the illegal Nazi party held its last meeting in the cafe before launching the failed putsch against the Austrian government.
Less than four years later, on 4 June 1938, Sigmund Freud left his house after he managed to raise (with the help of friends such as Marie Bonaparte) the very large sum of money demanded by the Nazis for letting him, his wife and his daughter Anna leave for refuge in London. His apartment was turned into a crowded holding pen for other prominent Jews. He died less than 16 months later on 23 September 1939, aged 83. Four of his five sisters later died in the concentration camps in 1942.
Posted by AnneE at 8:38 AM