One of the worst things about getting older is seeing pieces of your personal history disappear. I don't mean that I'm forgetting my own past, or at any rate the bits of it that make up my memories - so far, that hasn't happened. I mean the way that places, people, even objects that figure in that past vanish over time.
Most of the cafes and restaurants and pubs where Harvey and I courted and celebrated our anniversaries have long gone. The Pate Shop. The Buttery. Pierre's. The Romney Arms. The Mexican Cantina. The Roxburgh. Ma Maison. But some of the shops we went to (Harvey was one of those rare men who genuinely liked shopping) were still here, especially Kirkcaldie and Stains. We acquired the only new sofa we ever owned from its furniture department on the second floor.
Harvey particularly liked their menswear section, and bought most of his clothes there. They made him merino suits and summer trousers. They supplied his beautiful Thornpruf tweed jacket, his Summit pyjamas and his deerskin slippers. They stocked the warm Viyella shirts I found for him when he first became ill, and when he was too frail to shop for himself, they let me take home several pairs of corduroy trousers for him to try on.
And it was there that he found the classic double-breasted navy blazer he bought to wear to Amy and Tom's wedding. It became his favourite jacket - he wore it to the launches of his last two books, and we dressed him in it after he died.
So I felt very sad when Kirk's closed on Saturday. Another piece of the remembered jigsaw of our Wellington life together has been lost. 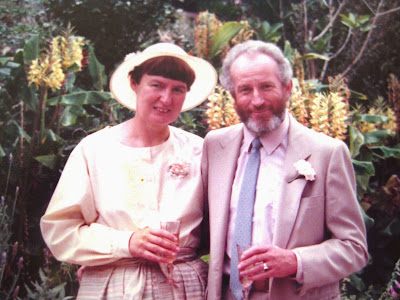 At our wedding in 1985 - Harvey had got his suit earlier from Vance Vivian (it was of course  a very elegant beige, not pink, the photo colour has faded) but his wedding shirt and tie came from Kirk's.