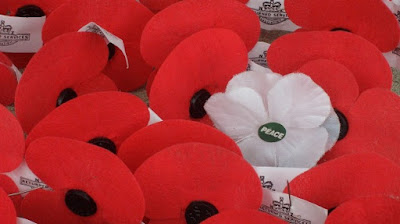 This morning I went to Tinui for the Anzac Day service, 100 years after the first service was held there in 1916.


Tinui is now a small farming community 30 minutes east of Masterton, with fewer than 25 permanent residents. In 1914 the community had 2000 people, and 36 of them – 35 men and one woman – would be killed in World War I.

The Anzac forces landed in Gallipoli on 25 April 1915. In 1916, this date was officially named as Anzac Day. To commemorate the seven Tinui men who died on Gallipoli, on 25 April 1916 the Reverend Basil Ashcroft held a morning service in the tiny Church of the Good Shepherd.

The Wairarapa Archive office holds a service sheet showing that this took place at 7.30 am, making it the earliest known recorded Anzac Day commemoration in the world. A second service was held that afternoon in the Tinui hall, which had room for the much larger numbers who came to it. This morning it was held outside the hall built much later.

That first Anzac Day fell on the Tuesday after Easter, so it was already a school holiday. Anzac Day became a public holiday in 1920, several years before , and the dawn ceremony was officially introduced nationwide only in 1939.

After the early service, Rev. Ashford led a group of 10 men, 7 women and 24 children, including the local Scout troop, up Tinui Taipo, more than 1097 metres above sea level, to set up a large wooden memorial cross.  Also known as , it was part of what was then Tinui Station, owned by the Maunsell family. Their son had served at Gallipoli, and they were strongly involved in the memorial project. It’s said that the barren landscape setting for the cross resembled Chunuk Bair. Today's memorial service sheet told us that once the cross was in place, those who had made the climb wrote their names on a piece of paper which was buried in a bottle at the foot of the cross.

This is the only known cross dedicated to Anzac losses during World War One. Because it was put up on the morning of that first Anzac Day in 1916, it has a good claim to be the first such memorial in the world. Heritage New Zealand says that the unveiling of the cross so soon after Gallipoli was:


"...the result of the impact that the Anzac campaign had on the small community at Tinui. The memorial was conceived as both a tangible demonstration of the Tinui area’s respect for those involved in the campaign, and more specifically, to [commemorate] those who died.”

In 1965 a locally made aluminium cross was set up to replace the wooden one, which had rotted. The original cross was put under the stage at the Tinui hall, but it later disappeared. In 2011, the Tinui Cross received a Heritage New Zealand Category 1 registration.


Since Tinui’s historical significance became better known, the numbers attending its Anzac Day service have grown. On the 100th anniversary of that first commemoration, 3000 people were there, including 94 descendants of the Ashcroft family. Basil Ashcroft's great-grandson, Lieutenant Colonel Aaron Mikkelsen, gave the main address at the service. Twelve-year-old Linda Morgan, whose relative is named on the Tinui war memorial as killed in World War 2, was the bugler who played the Last Post. 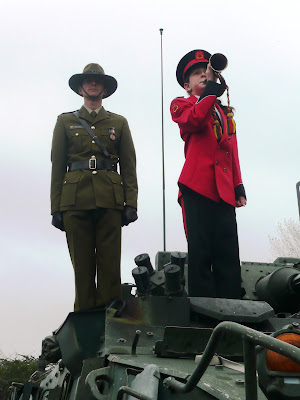 
And here's the hymn by Shirley Murray that we sang this year, to the tune of Abide with Me:

Honour the dead, our country’s fighting brave,
honour our children left in foreign grave,
where poppies blow and sorrow seeds her flowers,
honour the crosses marked forever ours.

Honour the brave whose conscience was their call,
answered no bugle, went against the wall,
suffered in prisons of contempt and shame,
branded as cowards, in our country’s name.

Weep for the waste of all that might have been,
weep for the cost that war has made obscene,
weep for the homes that ache with human pain,
weep that we ever sanction war again.

Honour the dream for which our nation bled,
held now in trust to justify the dead,
honour their vision on this solemn day:
peace known in freedom, peace the only way. 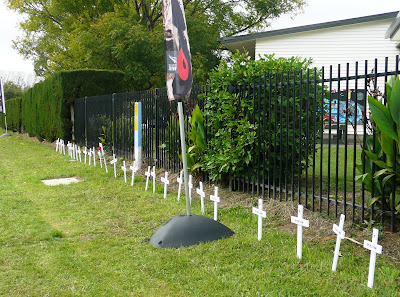