Yes, I do know exactly where I was and what I was doing when the news of Diana's death reached New Zealand. For the last month we've been seeing endless footage of her, and her charitable work has featured prominently. But few people know that even in death, she managed to perform one last gracious service. This seems a fitting time to tell the true story of how Princess Diana saved my mother's life.


It’s hard to think of what to give my mother. When I was young she had a weekly women’s magazine order – the New Zealand Woman’s Weekly, of course, as well as the English Woman’s Weekly and the glamorous US Ladies’ Home Journal – along with comics for me. So for a few years I give her magazine subs for Christmas, until she says they’re full of stars she’s never heard of.

When I lived at home, I never saw her reading books; but one day she tells me that when she was alone all day, wanting to keep up with me, she secretly read my English schoolbooks. Then she started in on Dad’s collection of Reader’s Digest Condensed Books.
I buy her Catherine Cookson romances, where deprived but determined girls break free of their past. At first she loves them, but after the fifth one she says they do all seem a bit the same. So I track down classics from her youth – Forever Amber, Precious Bane. And memoirs of women she knows – Aunt Daisy, Cookson herself, the illegitimate laundry-hand turned rich and famous author.
Her favourite is the story of an ordinary 1950s housewife: Journey from Stranger's Rest, by Dorothy Alice Ford. When you’re reading something good, she says, you forget everything else.
At ninety, she falls. The doctors say she’s got the hip of a seventy-year-old. They patch her up and send her home, telling her she must get moving. I fly up to Auckland to spell off my sister. Mum lies there with her awkward catheter, resisting all my ploys, refusing to get out of bed.
On the third day the phone rings. It’s her grand-daughter Rebecca: “Princess Diana’s been in a car accident.” Soon she calls again: “Diana’s dead!” My mother hauls herself up, teeters into the living room and turns on the television. She eats her dinner in front of it on a tray. Next morning she gets dressed.
For her ninety-first birthday, I bring her Diana: Her True Story - In Her Own Words. Mum can’t wait. For the first time in our lives, we sit across from each other at the table, reading. 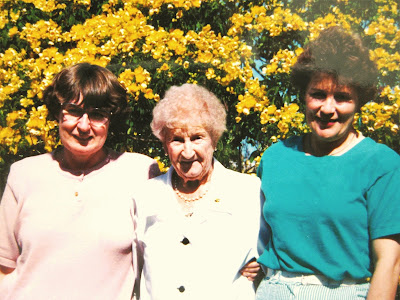 My mother, Frances Ryda Matthews, in 1995 when she was 88,
with me and my sister Susan