So far, so good

The walking plan is going quite well - better, as you can see, than the blogging plan. I keep getting distracted by books to read and review, friends to phone and see, lunches and dinners to cook, the fact that it's warmer down in the living room than it is up here at the computer - and a mild winter addiction to House Rules.
I'm well aware that such programmes are carefully designed to hook you in. The contestants are obviously hand-picked to be compared and contrasted - the older couple, the parents of seven kids, the rough-and-ready ones ... though I come a bit unstuck on the two very similar-looking young blonde women and their handsome husbands, I tend to get them and their "zones" confused.
Like most TV contest series, this one has a subtle and uncomfortable affinity with the appalling Depression-era marathon dance competitions so effectively captured in Sydney Pollack's 1969 film, They Shoot Horses, Don't They. In those contests, too, the audience was manipulated along with the contestants. It's a hymn to conspicuous consumption, too - this week the couples have been hard at work tearing down the bits of their renovated houses they don't like and replacing brand new stuff with another lot of new stuff.
But I keep coming back for more. I started watching while I was organising the bathroom reno. That one room took me a couple of months to plan and it took my nice tradesmen weeks to complete. They didn't work slowly, they were just fitting my small job in with all their other, larger jobs, waiting for things to arrive or dry properly, and so on. (Only in TV-land do tradesmen appear instantly and either all at once, or immediately after each other, and heaven knows when or if anything gets to dry or set or whatever.)
Of course, a good part of the appeal was that what the HR couples were expected to cope with every week made my bathroom seem a piece of cake. And I didn't have to suffer inspection by two snooty designers at the end. (Maybe I should have asked my viewing friends to fill out little score-cards.)
The baser aspect of HR's hold on me has to do with my own pretensions to home decor expertise. I like watching what everyone comes up with as they wrestle with a swarm of trendy "house rule" style concepts from "junkshop chic" to "modern rustic" to "vintage luxe", while dealing with the untrendy realities of rotten framing, asbestos linings and cockroach infestations. I have no idea myself exactly what such phrases mean, but it is a mean kind of fun to watch obviously awful  choices being made (the hideous wall-art, the sacking ceiling...)
What really interests me most, though, is the whole notion that it's fine for complete strangers to come charging into your home, turf out pretty much everything you own, and replace it with stuff they have chosen that has no history or meaning for you apart from its newness and trendiness. I remember when I wanted to replace some of our kitchen plates and bowls because I'd seen some really pretty Hooker's Fruit ones on sale at Briscoe's (and I needed the right size bowls for microwaving Harvey's porridge).
Harvey looked hurt and said, in a puzzled sort of way, "Aren't you loyal to the old china?" He agreed only when I pointed out that we hadn't actually chosen the ones I wanted to replace, he had won them by buying a bottle of brandy at the local liquor shop. The  were thick and white and we'd never liked them all that much, but we'd felt we shouldn't look gift china in the mouth, so to speak.
He had been born into the Depression. I grew up in better post-war times, but even so, when I first got married there was very little around in the way of affordable, attractive household goods. So we both had  a tendency to hang on to and hoard things once we got them, even if we really didn't need or want them any more. But we also both cherished things harking back to our respective pasts and our lives together - books and pictures, inevitably, but also familiar pieces of furniture, pottery, china, even kitchen tools (I wrote about some of these in my memoir). And now Harvey is gone, they mean even more to me. I can't help hoping (almost certainly in vain) that somehow it will be my son, not me, who will have to deal with their disposal.
Meanwhile I can enjoy shifting them around into new lights. The bathroom has at last provided me with a place to put the collection of small Crown Lynn vases that I've stubbornly hung on to since we moved here seven years ago. And in case you're wondering, I've called the bathroom concept I was working with "upstyled '50s retro". Just so you know.  You may have missed them on Facebook, so here they are again, for your viewing pleasure. 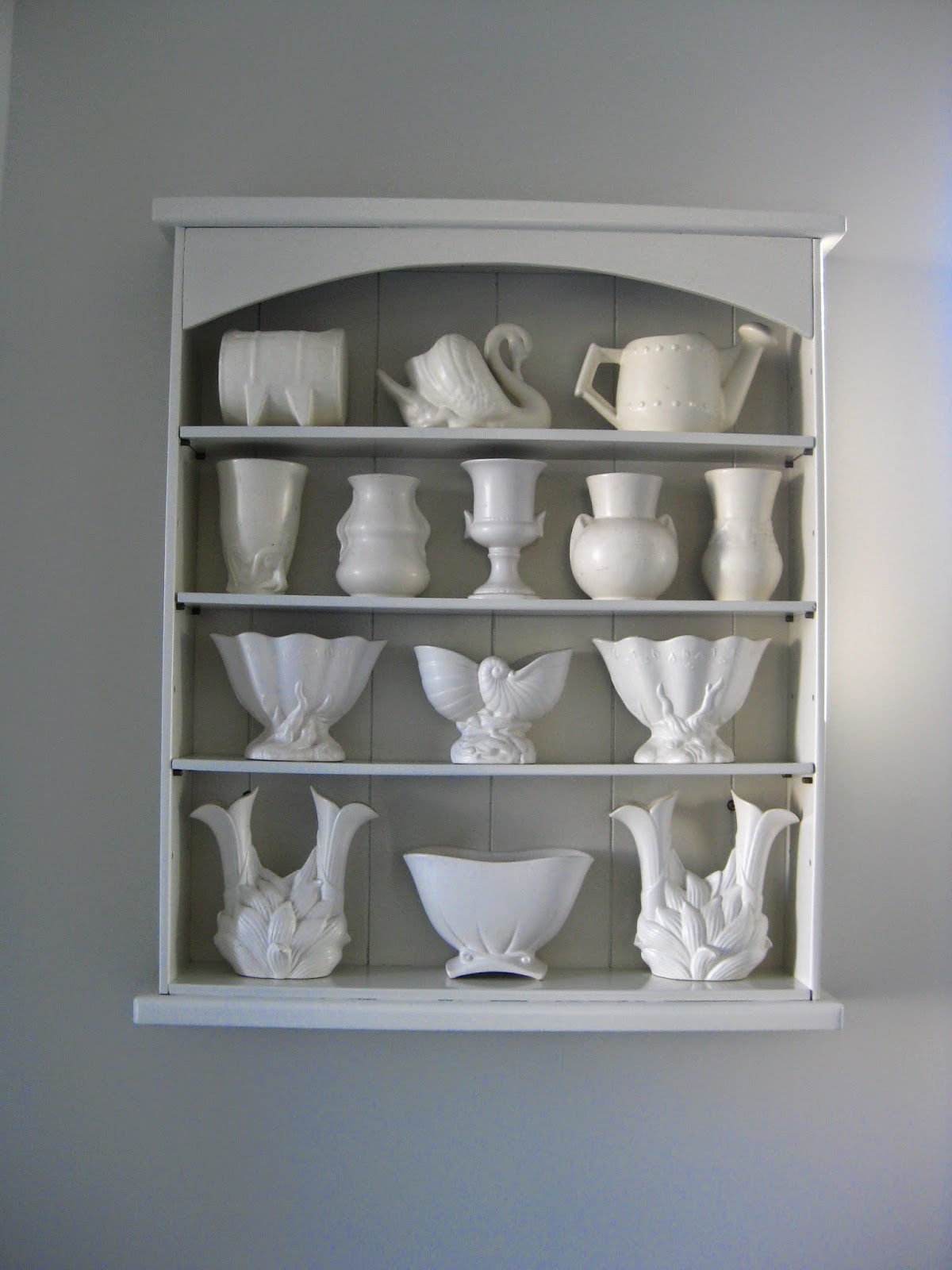