It's been a busy week, with several meetings, book group, visitors, outings, book reviews, a phone call to my son in China (he's been very good since Harvey died, he makes sure to be home at a set time so I can phone him - much easier and cheaper for me to do it, and the line's much better than it used to be), and in among all this, sometimes successful efforts to get on with finishing my book. There isn't much to do - only one short chapter to write, another to finish, and a lot of tidying up. But I'm a superb procrastinator. Still, once I set a deadline I usually manage to meet it, and I've set myself to finish this by the end of November at the latest. If it runs any longer it will collide with other commitments, Christmas, travel, etc, and get pushed out much too far. So there may not be much blog posting going on for a little while, or at least just brief ones.
Today a friend and I went to Pataka in Porirua and saw Grahame Sydney’s exhibition ‘Down South', with 27 recent paintings. There are also 25 prints of photos from his new book, 'Grahame Sydney’s Central Otago'. I can't show you any, as of course they're all copyright, but the paintings took me back to the one trip Harvey and I had to Central, in the summer of 1980. We always meant to go back in the autumn, but never did.
As well as Sydney's more familiar landscapes, with gold hills and wide skies, there's a brilliant series of winter paintings. Some are of Antarctica, others are his beloved Central Otago in the depths of winter, almost empty of any human trace, with the horizon of the whited-out land disappearing into the sky. They were incredibly bleak and chilling, but I liked them - they seemed to me to be expressions of my worst times, only with a timeless, more-than-human sweep which transcended individual feeling. If you get the chance, go and see them. The exhibition runs until 6 February 2012.

Nothing could have been less bleak than Sirocco at Zealandia - I had the great pleasure of going to see him the week before. Of course he's nothing like a wild kakapo, as his custodian was at pains to point out, because he's been hand-reared since he was a tiny chick - the wild ones don't want anything to do with humans, whereas he clearly loves us and revels in all the attention. He's a parrot, after all, and if they start young they bond very strongly with us. I know it's an illusion, but he does look incredibly wise and benign.

I loved handling the little bag of incredibly soft feathers she handed round, but couldn't pick up the famed musky odour we were supposed to detect by sniffing the bag of his poo. (That's what happens when there are only 129 of you left.) And as it was night time, and no flash was allowed (it would damage his eyes), you'll have to make do with this little photo from the Zealandia website. To make up for it, here's one of my friend Camille's parrot Claude. Sirocco may be famous for humping Mark Cawardine's head, but Claude regularly humps Camille's hand - that's how she discovered he was indeed Claude and not Claudine. 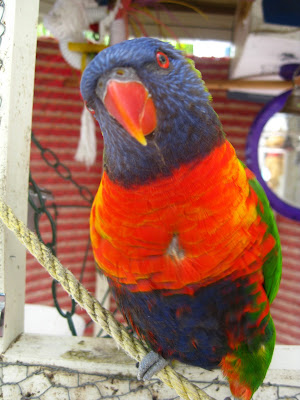 Of course I've been doing this post instead of my book, and now I've run out of diversions, so I'd better get on with it.﻿
Posted by AnneE at 9:19 PM