This week I've been involved in two things that look entirely different but are really closely related. 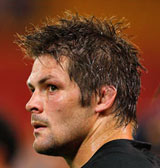 First there was the rugby. I've written before about my complete ignorance of Our National Game, and throughout the WC the most I ran to was knowing who was playing whom in the quarters and semis, and the results. Oh, and Dan Carter's groin problem. No one in New Zealand could have missed hearing about that.

But when Sunday was looming, I thought that if I didn't watch the final I would feel sort of isolated and Left Out. Also, completely irrationally, I got the idea that I ought to watch it for Harvey's sake. So I asked my 86-year-old neighbour Frances if I could watch it with her. I knew she'd be only too happy to explain whatever I needed to know about the rules. It would be the very first rugby match I'd ever watched all the way through.
The camerawork was so good even I could see that the French were playing well and the All Blacks - not so well. In the end they didn't so much win as not lose. Anyway, at least it was anything but boring and they did carry off the coveted cup. So I guess Harvey would have been happy. And I could join in all the post-match conversations. 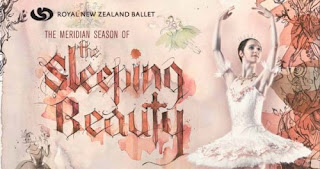 From rugby to ballet is not all that big a leap. They have a lot in common - both require supreme fitness, flexibility, physical skills and teamwork. I'd love to see as much fuss made of our outstanding national ballet company as of our national rugby team.
Harvey loved ballet as much as he loved rugby, and we always used to go, but I hadn't been since he became ill. A party of friends were going and had a spare ticket, but I was booked up for that evening. So when Logan Brown's email newsletter arrived with a competition to win two tickets, I thought I might as well have a go. I wasn't at all hopeful, because I'm just not one of those people who win things.
But lo and behold, on Tuesday an email arrived from Steve Logan telling me I'd won and the tickets were mine! I couldn't have been more thrilled. I'm going to take Jenn, who came with me to the Catlins. She and her husband Barrie have been incredibly kind to us both, and as Jenn broke her arm recently she needed a boost. We're having LB's pre-theatre dinner first, and Mr Logan is shouting us a couple of glasses of champagne. Salut!
Posted by AnneE at 10:03 PM