Reading has always been absolutely central for me, and in difficult times it's my constant solace. When Harvey was taken to hospital after his last fall, I knew I'd probably be there for hours, so I grabbed Jonathan Franzen's Freedom - I'd given it to Harvey for his birthday but neither of us had read it yet. It saw me through that night and on through the gruelling days and nights that followed, into the New Year.
So while I finish off my new book, instead of a proper post this week (and thinking ahead to Christmas), I want to rave about two great new books I've recently reviewed. 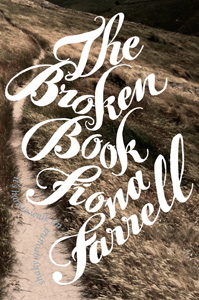 The first is Fiona Farrell's The Broken Book (Auckland University Press, $34.99). It's her first non-fiction book - she had planned a book about walking, but the earthquake broke into it and changed its shape. It begins with the neatly titled “Preamble”. Four long essays follow, each built around a walk: two in France, one in with her granddaughter, and “A walk on shaky ground” covering the earthquakes from September to February. It ends with an Epilogue. Throughout the book, 21 earthquake poems interrupt the prose. In my review for the Sunday Star-Times (20 October).  I said:
"This is some of the finest writing of its kind that I’ve ever read, and it made me jealous. The essays move apparently effortlessly back and forth through time and place, and other writing on walking and on earthquakes, from Mansfield in Menton, to R.L. Stevenson’s Travels with a Donkey (Farrell followed his path), Voltaire on the 1755 Lisbon earthquake, and the mental promenades of Rousseau, cut short by his death. The interpolated poems enable Farrell to shift gear and convey meaning in a different way...."
"The two forms work impressively with and against each other. Farrell is not a flashy writer, and she doesn’t go in for showy effects. The words on the page speak quietly and effectively, getting across what she is thinking and feeling in finely paced, crystal clear words that add up to something of great depth and beauty... The transitions are especially well done, never feeling forced or contrived. And the poems cutting into the essays do give the sense of interruption, rupture, disturbance, that the earthquakes must have caused, both physically and mentally. They force you to stop and read them more than once, before you pick up the thread of the prose again. At the same time, their full sense becomes clear only once you have read to the end and know, for example, that the bagel shop in “Black and white” no longer exists."
"Farrell didn’t lose anyone close to her in the earthquakes – if she had, she could probably not have written this book. But what she does do is take you into what it was like to have the familiar world so shaken and broken. And she does more than that – the walking she writes about, both real and metaphorical, moves you on through human existence, the best and the worst, in a way that leaves you feeling immensely enriched, as only very good books can do, enabling you to see things differently and better than you did before."

On Nine to Noon this week, I reviewed Pam Ayres' memoir, The Necessary Aptitude (Ebury Press, $39.99). It's funny, of course, very funny in parts, but it's also a stunning evocation of what it was like to grow up as a bright working class girl in a post-war English village  where class boundaries were still firmly enforced.
You can find and listen to my review here. Happy reading.
Posted by AnneE at 11:07 AM