Apart from the almost endlessly soggy weather dragging me down a bit, I've been chugging along fairly well for the last fortnight, cheered as always by my friends and wonderful emails from my son (who's arriving next week for a fortnight's stay). Here's an extract I'm sure he wouldn't mind me sharing - he's just moved into a new apartment. "I was kind to a large spider who decided to rest herself on my living room wall, I didn't kill her but encouraged her out with a broom. Unfortunately she then took the opportunity to give birth on the balcony and I now have an entire spider family appearing in the evenings. Just baby ones, but they were not in my design plan!" 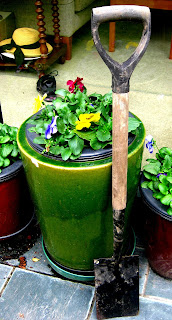 On Tuesday Ali arrived for her regular gardening day, bringing me a marvellous find from her local op shop - a beautiful small spade, exactly suited to me and my garden. Until now I've had to borrow Ali's or Lesley's - Harvey had one, of course, but it seems to have vanished, and in any case it was too big for me to manage. This one was made by the English firm of Spears and Jackson, the Rolls Royce of garden tool suppliers. We put it to work straight away, planting a new viburnum.


The tulips have finally started to appear - I thought I might have planted them too deep, but five are up, so there's hope for the other four. 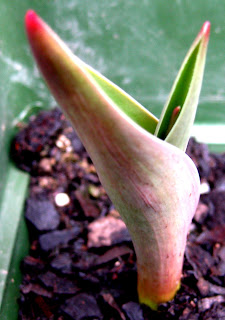 And the rhubarb Ali gave me is flourishing in its big pot, though she told me I'm not allowed to start eating it until next May. 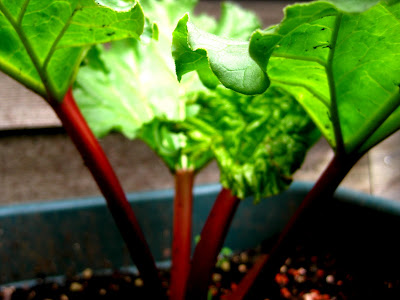 It looks a bit surreal, like the astonishing film I saw yesterday, Beasts of the Southern Wild. Harvey had a much stronger film stomach than me, but otherwise our tastes fitted very well together, and we used to love the annual festival. But I don't mind going on my own, though I miss having him to talk it over with afterwards. I choose my films carefully, avoiding the ones labelled violent, terrifying, chilling, enigmatic, circular...  I probably miss some good things, but at least I can be pretty sure I'll enjoy myself and not end up hiding under the seat or walking out.  So far this year I've been transported to Lebanon, revolutionary France, Japan, and a Louisiana swamp, and every time has been superb.